In 1985, at the end of our second year at engineering, in our summer vacation, Subba Rao got this idea to go to Pune to visit his friends. They were kind enough to extend an invitation not just to him but his pals so he invited us over. Since I had never been to Pune ever in my life then, I decided to hop on, and off we went in the train, Subbu, me and two unlikely companions, Deepak Wasnik and Prasanna. Or was it Choudary? 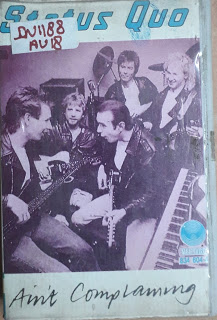 Now the friends put us up in a hotel in Deccan Gymkhana. I really loved going out to Deccan and walking by - enjoying the shopping, the shops, looking at pretty girls (one young lass in a pretty red top stole my heart - but something with journeys, I always lost my heart to someone). We were taken one day to the college (Symbiosis) and on another day to Camp.

Camp was where all the action was and we were amazed at the shops, the girls and spent long hours that evening. I remember them treating us to chicken sandwiches and rose milk even then (1986) and I am still not over Marzorin. This May I went there with Anjali and we ate some chicken sandwiches and drank some rose milk. While walking down Camp I, as always found a music shop and was thrilled to see they had more variety than I could ask for. Since my money situation was rather limited, I picked one. A wonderful choice.

https://www.youtube.com/watch?v=c2_P12UGWvs (Who gets the love?)

That was the first time I met Status Quo, with their super hit single 'In the army now'. I picked up some assorted cassette with that song and many other wonderful songs (lost it) but became a die hard Status Quo fan for life.

Years later when I saw Status Quo's 'Ain't Complaining', a stellar album with numbers like 'Ain't complaining', 'Who gets the love', 'Burning Bridges', 'I know you're leaving' and 'One for the money' I just picked it up without a second thought. In fact, the entire album did not have a single song you wanted to fast forward. Everyone back home loved it - friends especially and it played many times in the background of our discussions etc. I lost the original tape (or more likely someone borrowed it) but I liked it so much that I bought another one much later which I now have.

https://www.youtube.com/watch?v=PUV4c4bt2Fk (I know you're leaving)

'Who gets the love' deserves a special mention. During a famous breakup, I heard this song being sung by the breakee demanding to know 'who gets his love' after the breakup. I can imagine the guy saying at that stage, feeling a bit like Rhett Butler I'd suspect, 'Frankly my dear, I don't give a damn.'

Anyway, thanks Status Quo for endless hours of pleasure. Will dedicate it to Subbu because we would not have gone to Pune without him.
Posted by Harimohan at 10:41 PM