Dreams of my Father - Barack Obama

Barack Obama writes his memoir, his roots from his father, a black Muslim from Kenya who comes to Hawaii on scholarship to study and escape his poverty, and his mother, a white Christian from the USA, who is also studying in Hawaii. They seem to have divorced pretty early as Barack Obama senior went to Harvard and then to Kenya again where he already has a family and children. Obama's mother falls in love and marries an Indonesian man and after a few years there, they come back to Hawaii. When he is ten years old or so, Obama's father comes to visit and for the first time he meets him before his father returns to Kenya. 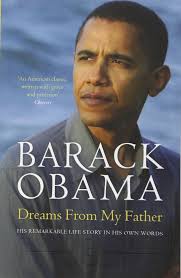 Barack is one of the two black boys on the island so he is not too happy with how he is treated. A bit of the history of the blacks, the discrimination he faces, hurt him. He studies well, goes to the mainland, to Los Angeles and then to Chicago to work for the blacks as an organiser. (Sometime in those years, he starts fasting on Sundays and brings a severe discipline into his life, towards the end he even gives up smoking.) The work is tiresome and he does a fair job of it too.  While there he meets many people of the Church of the Nation of Islam, and understands the difficulties and aspirations of the poorer sections of blacks. While here he meets his stepsister Auma who visits him from Germany and they plan to visit his father's family in Kenya.

Obama meets his father's sisters, wives, and his many cousins. He learns about the life of his grandfather, how they used to tend to farmlands or fish before the white men came. then his grandfather works for the white man as a cook, puts some money away, buys land, builds a house and educates his son Barack (Obama's father). Obama's father and his sister once run away from the house of the disciplinarian father who is a stickler for rules and cleanliness, then come back. Their mother cannot handle her father and she runs away too. Barack senior finds two American ladies who tell him how he can apply for scholarships and get out of the mess he has landed in - his father disowns him when he does not pay heed to his advice after school. Admission in Hawaii and the story ends.

By the end of the book I felt that however much he achieved, Barack Obama will always carry that sense of not belonging. (It's not a nice feeling - I hope it's not true.) And like Barack Obama himself said, the book was written when he was younger and would have been 50 pages shorter if he had written it when he was older. There are many times when he goes inward, and the pace and action slows down, while he pretty much repeats himself. However, it does offer a fine perspective into the life of a mulatto - the son of a black and a white - with roots in Africa. I enjoyed reading the Kenyan adventure the best, especially that of his grandfather and his life. Thanks Abhinay for a lovely birthday gift.
Posted by Harimohan at 10:44 PM