A compilation of stories, essays, poems that celebrate our common humanity. Black, White, Asian, underneath we are all the same is the theme. Contributions include those from Muhammad Ali, Stevie Wonder, Maya Angelou and others. Yolanda King is Martin Luther King's first daughter. 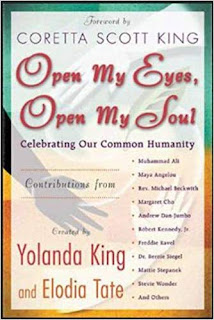 I note the obvious differences
in the human family,
Some of us are serious,
some thrive on comedy.

Some declare their lives are lived
as true profundity,
and others claim they really live
the real reality.

The variety of our skin tones,
can confuse, bemuse and delight,
brown, pink and beige and purple,
tan and blue and white.

I've sailed upon the seven seas
and stopped in every land,
I've seen the wonders of the world
not yet one common man.

I know ten thousand women
called Jane and Mary Jane,
but I've not seen any two
who really were the same.

Mirror twins are different
Although their features jibe,
and lovers think quite different thoughts
while lying side by side.

We love and lose in China,
we weep on England's moors,
and laugh and moan in Guinea,
and thrive on Spanish shores.

We seek success in Finland,
are born and die in Maine,
In minor ways we differ,
in major we're the same.

I note the obvious differences
between each sort and type,
but we are more alike, my friends,
than we are unalike.

We are more alike, my friends,
than we are unalike.

We are more alike, my friends,
than we are unalike.

The stories are about black and white Korean and Japanese, how people overcame these barriers of colour and culture and created lifelong bonds and relationships. One story about a Mexican babysitter (so similar to the movie Roma), of black African American soldiers and their experiences - one where the entire bus of white people gets off when the bus driver asks the black gentleman to get off because one white gentleman refuses to let that happen to a soldier, little children not noticing their colour but being amazed that their hair is different, a white girl who does not go out on a date with a black boy because her parents would not approve and not able to get over the hurt she sees in his eyes, the Catholic doctor not being allowed to marry a Jewish girl, a Korean mother taking home her child of mixed parentage and finding love and acceptance and not hate, Muhammad Ali finding inclusiveness in Islam and all religions and same with Stevie Wonder, a black doctor from Africa and his white wife forced to live apart all their lives - she in England and he in Africa, and so many more.

Posted by Harimohan at 1:06 PM