This is a workbook. It's a series of conversations, questions and answers, about money and it gives some wonderful perspectives into life itself. After a whole bunch of questions about what money means to us, what emotions come up when we think of money, what it feels like, look like, tastes like, which direction do you see it coming to you from, do you have more than you need or less, what color, what's easier - inflow or outflow and what 3 things would sort your current financial situation - we move into the conversations. 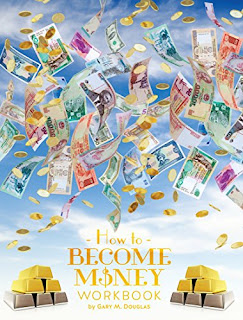 One of the first concepts I liked was that of allowance as opposed to acceptance. He gives the example of a rock in a stream of water. In a state of allowance, the water goes around you. In acceptance you get washed away with the water.

Another concept that I found interesting was how when we align or resist with anything, we make that a 'solidity'. Instead, the idea is to lighten it -make all points of view interesting points of view. He classified acceptance as having three stages - alignment, resistance or reaction. Look at everything as 'interesting' and do not solidify it.

He says 'be' what you would have. Hence BE money. Money should be within you. To be that create yourself as money, power, energy. Pull in energy from everywhere through every pore - flow it out.

The key mantra is to be - power, creativity, awareness, control, money. Be ready to receive.

If you are worried about security he says there can be no real security or guarantee for anything. The only security is the truth of us as a being, a soul. As one of the light. BE money.

It is we who create happiness he says, not money. The idea always comes first. For eg. I must work to have money. But that is an idea that came first. (He says it makes immense sense to throw our brains away because it limits us with this kind of thinking.)

Another conversation he has is when he asks a student if she wants to pay off her debt and all her debts. She sounds hesitant obviously because she does not see herself in a position to pay off her debts. He tells her that she must realise that she is functioning from a place of 'not enough' and 'not having enough' and also congratulates her that she has done a great job of not having enough. She could change the story and create a new one where she has enough.

Make money 'light'. Don't make it some hard thing - lighten it, so it is easy to pull inside of you. What you could have had must be within you and not outside you.

You as the unlimited being that you are, have access to all the knowledge in the world. You are but a pipeline for the awakening of cosmic consciousness. Don't live in the fear of success, of your power and your ability. Know that you are connected.

If you want to have something - it must be inside of you. To get more clarity of your life, live life in ten-second intervals. Only ten seconds. It's beautiful.

He also makes the students eliminate 5 words from their vocabulary - Want, Need, Try, Why, But. These are the words, especially the first two that make everything be outside of you. They create the separation between you and what you could have. 'Need' is saying you do not have it. 'Want' is saying I lack. 'Try' is saying I do not do.

He says money is not a necessity, it is the breath of your life. You cannot alienate it or make it outside. So you are your own boss. Create your life and allow it to come to you. Allow yourself to make 100 thousand dollars. Do your work from love, be not work but fun, in anything you do. Enjoy your money, your relationship with it.

Create. Be willing to change it. Be that loving to yourself and you are money and you are at ease.

The tools he reiterates are


The ideas are profound. Live in allowance. It is all inside you. Believe it. Live in 10 second intervals. Lighten everything.

Posted by Harimohan at 6:47 AM