This is a trilogy written by three different writers on three of Gulzar's most popular movies - 'Angoor', 'Aandhi' and 'Ijaazat'. Sathya said she would have liked to write about 'Ijaazat'. The book analyses the movie, how it came into being, the actors, its music etc. 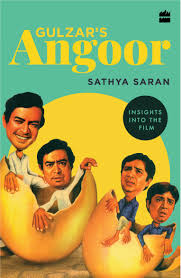 'Angoor' is an adaptation of Shakespeare's 'Comedy of Errors',  a story of two pairs of identical twins, which has been adapted into plays and movies across the world in several languages. In India, the first version seemed to be a Bengali movie 'Bhranti Bilash' based on Ishwar Chandra Vidyasagar's novel of the same name.  Then Bimal Roy attempted a Hindi remake called 'Do Dooni Chaar' with Kishore Kumar and Tanuje, which was directed by Debu Sen. Gulzar wrote the script - in 21 days - he was then working in a garage they say. The movie flopped badly.

Gulzar, however, believed in his script and finally pursued a gentleman called Jai Singh to produce his story titled 'Angoor' (for no reason at all). The movie became an all-time classic.

Nice insights. Good, easy quick read. I went to Sathya's book reading at Kalakriti Gallery recently where she was in conversation with Aparajita Sinha, Bimal Roy's daughter. It was a fun evening with some clippings from the movie.
Posted by Harimohan at 4:32 PM