A 1963 romantic comedy set in Paris. An upright and naive young policeman hits the notorious beat known for hookers, pimps and all things unlawful. He upsets the apple cart, disallowing the fair ladies their trade, and loses his job shortly after. While finding his feet he falls in love with his favorite hooker (whom he rescues from her pimp as well after a heroic fight) and she falls in love with him. 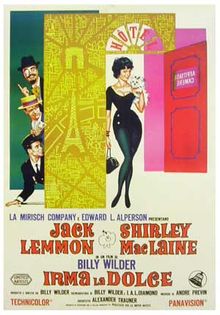 But he loves her so much that he does not want her to bestow her affections on any other man. So he dresses up like an eccentric English gentleman who pays her a lot of money to be her only client. Of course he has to change costume and work his fingers to the bone after that. The arrangement continues until he is forced to retire the old eccentric but is mistaken for having killed him off. Jail, escape and a happy reunion with his love ends the story.

Jack Lemmon, Shirley McLaine and a fine saucy story with several interesting characters makes it a fun watch. Another classic knocked off the list.
Posted by Harimohan at 11:18 PM