Anjali - That Will Teach Us To Be Careful

Anjali is thrilled that she would be using a pen at school now. She asked me what sort of a pen I used when I was first allowed to use one at school. I could not really remember but I certainly remembered that ball pens were taboo those days. 'They spoil your handwriting,' was the refrain. People who wrote with ball pens were looked down upon a bit. The proper thing to do was to write with fountain pens. They came with nice nibs etc but also had problems of having to carry ink bottles, fillers and even blotters. Invariably we would mess up something or the other with our fountain pens leaking or some such thing. One time that the fountain pens came in great use was before Holi when we would spray the ink from the fountain pen on all and sundry. 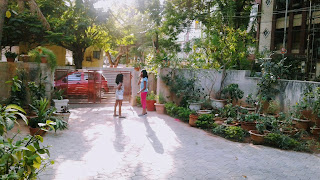 But the rule held and we continued using fountain pens till we got to a stage when rules did not touch us and we could openly rebel against all that represented nice and good.

To come back to the story, I told Anjali that we used fountain pens.
'They used to tell us that our hand writing would be better with a fountain pen,' I said.

'Yes,' she agreed. I remember now that she had bought a fountain pen for herself a couple of years ago, which she probably never used.

'Maybe they don't allow them anymore because they are messy,' I said.

'Yes,' she agreed. 'Everyone will mess it up at least once I am sure.'

'But that's still not a valid reason,' I said. 'If it helps, they should use the fountain pen. At east you will know and experience that as well. It's lazy to simply cut it out because it could get messy.'

'Yes,' said Anjali. 'Even if we mess it up, it will teach us to be more careful.'

We'd just be that much more careful the next time. Maybe it is not a bad idea to take the messier route just to become more aware, more careful.

Posted by Harimohan at 5:29 PM