Charminar at Midnight During Ramzan 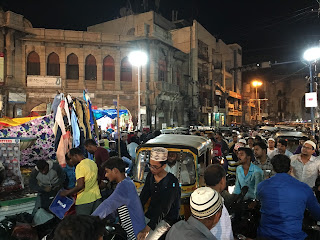 There's stuff to see and stuff to eat. I told Sunnie and he was keen to go and Sagar was always keen on the Charminar ride so we set off at about 11 pm in our car.
The crowd and traffic started picking up as we entered the Madina area. It must have been close to midnight. We took some fifteen minutes to go past the hundred metre distance past Shadab and find some parking space. 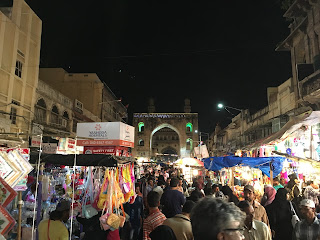 I wondered if I should have parked on Naya Pul or somewhere near Salarjung museum. But we chugged along and squeezed in between two cars by the side of the road. There were policemen all along the way, every ten metres or so regulating the traffic. (Luckily there were no fly by night operators collecting parking fees.) I parked near the High Court and we sent up a silent prayer for the safety of the vehicle.
Then we took the inside roads and walked towards Charminar because the roads looked a bit easy to walk on. As we got closer though, the crowd increased.
It was midnight but shops were open, wares were being sold, people were moving about. We passed by some really old houses with Hindu names, Muslim names, open parking lots and some houses converted in comfortable apartments.
We walked for a good ten minutes and were panting slowly when we came to the spot near the Mithi ka Sher statue. From there we turned in to the action. 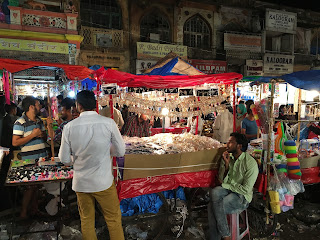 The road suddenly burst on to us with thousands of late night shoppers - all types, walkers, shoppers, gawkers like us. And in this madness where we could not even walk, there were auto rickshaws and bikes cutting through the traffic smooth as butter, the drivers cool as cucumbers. It can happen only in Charminar.
We found an idli and dosa bandi - the famous dosa bandis of Charminar - and decided that we must eat them. Having consumed a cheese butter dosa and some hot idlis that we so hot that we could not hold them, we walked onwards, feeling a little more happier with the world.
We slowly made out way to the road leading to Charminar from Madina and this was when the full impact of Ramzan nights at Charminar hit us.
The entire road was filled with push carts that were selling all kids of wares. We could barely walk through the crowd without changing directions every two steps. You have to jostle through so if you are unhappy with human touch stay away.
The crowd moves like one body, heaving, breathing. Each cart was lit with bright lights making the night so colorful that it was like nothing I have seen before. 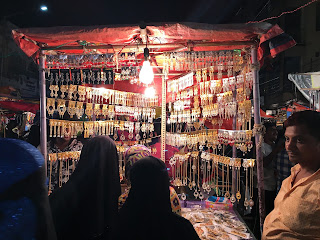 Bangles, clothes, crockery, perfumes, caps, sun glasses, dates, dry fruits...you name it, they had it and sold it. 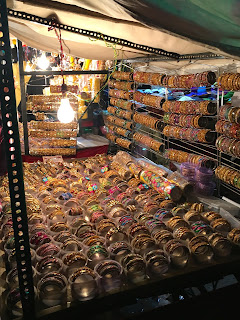 People were eagerly buying stuff. There were the photography buffs with their big cameras, sweating away the right angles.

Jostle, jostle, try this, try that, sidestep this and onwards.
Near Charminar the crowd got even thicker. Now there were fruits to be eaten, haleem vendors, a mad crowd in Lad bazaar. We somehow pushed our way to Nimrah and sipped a couple of chai and swallowed down crisp and buttery tie biscuits.

Once again feeling  refreshed we stepped out to head back and got a glimpse of Lad bazaar and the sight was enough to stop us from venturing into it. One umbrella vendor tried to sell me umbrellas.
Sunnie took pics as he trailed us and we headed back in the direction of Shadab. Without any shopping, nor any other major stop, we had already spent over an hour, just walking up to Charminar and back, a distance of not more than a couple of kilometres. That's how dense the crowd was. Festive and color are the words.
We went to Shadab which was full and found happy and energetic waiters serving tonnes of food and beverages, were handled by able stewards made us wait near tables and after twenty odd minutes, got ourselves a place. The place was so different - they changed table cloths, glasses and plates were clean, service polite.
We ate a biryani, drank Thums Up, shared a Falooda and then polished it all off with a paan. Then, we walked back to the car with great contentment. The time must have been about 230. The car could only be driven at a healthy 40 kmph and we all enjoyed the ride back in silence.

Seriously, in all these years in Hyderabad I'd never gone there? And seriously, it's like nothing I have seen before. One of those things that make you feel proud to belong to this place.

Posted by Harimohan at 1:01 PM