Vijayanthimala - Three Things to Learn from Her

I met the famous film star of yesteryears and MP, Vijayathimala for a brief while at a friends house. At 83 she is in fabulous physical health and in great spirits. She performs on stage still and Suhita says she is far better than most even at this stage of her life. In the short while, I could pick three lessons from her. 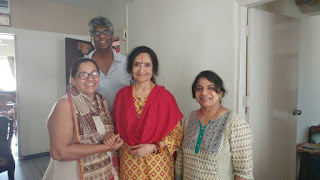 The first thing that impressed me was the way she was dressed, nothing out of place, even at the informal setting of her home. She stepped out in a simple, yellow salwar kameez and it was perfect. In my mind I decided to dress better and present myself better.

The second is her joy for life. 'I am eighty going on eighteen" she said with an effervescent joy. The happy spirit was evident in the way she shared her photos, the way she smiled, the way she interacted. It was like we had a giddy headed eighteen year old with us and not a heavy, burdened-by-life eighty year old weighing all of us down with her own expectations from life. The desire to stay in the future, the simple pleasure she got from her life overwhelmed whatever problems she may have had with life and the past. With most people that age, the past becomes bigger than the present. For few the future becomes bigger than everything and those are the ones who are lightest on their lives.

The third is the way she is physically active. She still performs on stage. I can understand how much it must mean to her to perform at 83. In fact she showed a few pictures of a recent performance and Shobha marvelled at how she was able to do that. In reply she smiled and said - eighty going on eighteen. In that smile, her eyes, her whole persona lights up.