A down and out producer has a script that is perfect for an ageing movie star Fedora. But Fedora, an ageless beauty, is reclusive and does not respond. The producer chases her to Corfu and finds that she is closeted with a doctor, a Countess and a secretary and a driver-bodyguard. His attempts at meeting her come to naught but he persists and meets and his script is rejected. But not before he comes to know that Fedora seems to be in trouble and is being kept there against her will. 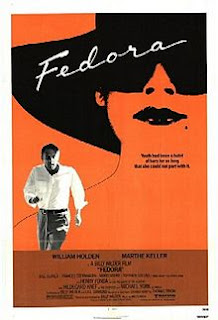 The movie begins with a scene where Fedora jumps in front of a train and dies. The producer then cuts back to the time he met her once - on a set when he was an assistant director - and the two spent a night of passion in his car in Santa Monica. What he discovers at her funeral is a story that's better than any script can ever be. The one who died is not Fedora - as he finds out when he sees her twenty year old hands. But like the real Fedora says, who will play my role?

It's so incredible that you feel that it's real life. Superb irony and ending. Fabulous story. Highly recommended.
Posted by Harimohan at 6:32 PM