The kingdom of Mahishmati is full of paradoxes. It has a set of rules that are as complex as the ones we are all ruled by - the types that get us all into knots and not get the real thing done. So for all its talk of a great country with great systems and stuff it ends up being ruled by a scheming dictator and the only few good people are bumped off or sent off to exile. Sounds bit like the Mahabharatha but of course the similarities do not end there. 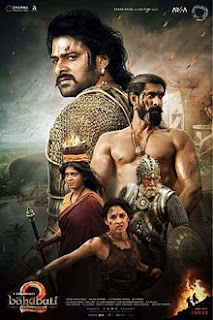 Bahubali 1 and 2 are good chaps (like good intentioned employees in any company). Then there are the bad chaps who are Bahubali1's cousin Bhalla and his father (fellows who want power but do not want to acquire skill). Then we have the ones bound by principles and rules that completely make them useless and in many ways senseless too - like the Queen who uses rules at times and who forgets their purpose all the time or the slave who also does the same (the useless bosses who have power but no sense of discretion). The baddies manipulate the rule bound Queen and the Slave and get rid of the good guys. Until Bahubali 2 returns, frees his enslaved mother, kills uncle Bhalla and claims his throne.

The script runs true but somehow I wondered at how a son would react upon knowing his mother is enslaved by his own uncle, how the love angle of the son becomes relegated to being a body guard again, how the uncle reacts to the woman he has enslaved, one he was supposed to have married. Why would he keep her enslaved instead of killing her off?  All through the movie one gets the feeling that something is a bit too loud or a bit too tacky - just that much. (Or maybe I am getting older.)

I would not watch it again. Once was fine though.
Posted by Harimohan at 11:44 PM