Hadn't seen this 1969 classic, and now stand corrected. It's full of twists and turns, red hot romance and fabulous songs. The movie kicks off with 'Meri sapnon ki rani..' and never loses steam after that. Check the poster out - its a full nostalgia trip - their expressions, those beautiful faces. 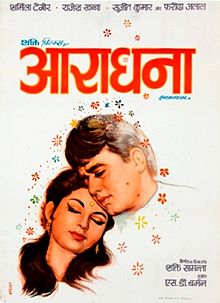 An airforce pilot falls in love with a pretty girl in town (meri sapnon ki rani). They are almost married and in a rainy night they slip up on their passions (roop tera mastana). Cruel fate strikes and the officer dies in a crash but not before leaving his fiancee pregnant. The fiancee tries to give up the baby for adoption anonymously and then adopt it back in the morning legally thereby avoiding the stigma of being an unwed mother. But cruel fate turns another twist and her baby goes to another house. The man of the house if a gentleman and asks her to stay as a nurse for the young child. Enter cruel fate as the younger brother of the lady of the house and he has eyes only for the nurse. In another cruel twist of fate, she finds that her son (now unofficial) stabs the rascal. Nurse takes it upon her and goes to jail. When she returns she finds her son has grown up and become an air force pilot and all ends well. Primarily the movie is ended before fate turns another cruel fate.