1963. Alfred Hitchcock. An adaptation from a short story by Daphne du Maurier. I remember seeing it once before, and like most things that are well thought out, needed a second look to make sense of it. 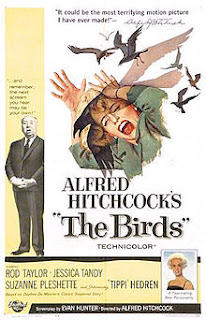 Starts where else - but a bird shop. A young man meets a feisty young woman known for her wild ways. They prank each other and he leaves the shop without the love birds for his kid sister. The impulsive young lady buys the love birds and heads right out to Bodego Bay, a sleepy hamlet where the man lives with his possessive mother and kid sister (and an ex-lover with a permanent sneer). The mother does not take kindly to the brash, rich, city girl but that really does not matter because out of nowhere sea gulls, crows, blackbirds start attacking people murderously. They kill a few people and do not kill some. Someone says that the girl is evil. But one night the family is completely under attack by birds that almost break down doors and the roof. Will they all survive?

What makes it unpredictable is that Hitchcock makes things behave out of their nature. Now we do not know why birds are behaving so, attacking humans and actually killing some (even blowing up a gas station once). It is this unpredictable nature that keeps the story taut - you just don't know when they will attack and you know they are capable of it. Superb story telling - without ever knowing why the birds became that way.
Posted by Harimohan at 5:26 PM