Rolf Dobelli lists 99 fallacies, effects, illusions and biases which he says mess with our decision-making. By being aware of these biases and other stuff we can make clearer decisions from the head (even though it's quite clear that decisions are not made by the head and by the heart). Interesting academic exercise, several experiments which show how humans behave in a manner not in their best interests. If we knew of these biases, we would be much more happier, wiser and richer. Fun to read because of the puzzles posed, the experiments conducted etc. Also the kind of stuff you can drop on unsuspecting chaps. 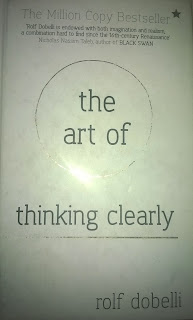 That's the lot, give or take a couple (I seem to have missed one or two but I followed Dobelli's findings and ended with a 99 - hopefully most won't notice - until now). Perfect decision making is yours if you can avoid all these biases. But why do we have these biases? How do they serve us? What is perfect decision making and how does it serve us? Why should I not volunteer is I feel pride in volunteering and instead make the perfect decision of sticking to what I know and sending the plumber? How is leadership not so much about skill? Why is skill an illusion? Why should I be critical of myself so much, so often?

There are many aspects which can be debated primarily because ambiguity exists and wrong connections can be made in the many studies quoted. Much advise seems to be highly critical of what you are naturally inclined to do or seem to do. If studies conclude that most people are behaving in a certain fashion there must be a reason why. (don't quote some bias now and say this reasoning is false) But it is surely beneficial to know such biases exist and this knowledge will make one more aware. Hopefully I will be able to make better decisions now. (Or am I falling for survivorship bias and overestimating my chances of making better decisions because I read a book - come to think of it how many people made better decisions because they read a book? So we are back where we began which is nowhere - only now we have some fancy words to explain where we are.) I liked the stuff on decision and will power fatigue and the many pointers to communications which can influence people behaviors.

Dobelli is a novelist and an entrepreneur. This book got some flak for plagiarism. However all the stuff noted above seems to be from studies conducted and he gave credit. Ok, how much is actually the same words etc is debatable - the ideas themselves are debatable - and interesting. Why can't we keep it there? It's not like earth shattering stuff - ok people behave this way - and they are likely to behave the same way. So let's get on with it. (Or is this some bias that I am falling into owing to my fatigue of writing such a long blog? Maybe I should listen to twaddle tendency and just shut up. See, I am already getting better at this.)
Posted by Harimohan at 11:38 PM