Fast paced action flick with enough gun fights, killings and action sequences to keep you glued. One problem. I didn't really get what they were up to. There's a bank that seems to be financing not just shady deals but killings as well, and that too of big political players. Simple as that. Get the money and you get the muscle. 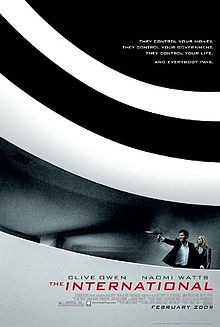 So we have an Interpol agent and an attractive DA from the US who are investigating the bank under suspicion when the killings start. They don't stop. One killing to another, one bad man to another, one huge gunfight, one slick assassin who kills in the style of Carlos, it goes on and on until most people except the protagonists die (how did they escape?). Enough to know that the game is too big. Watch, get entertained and walk away. No strain on the mind. No romance either.
Posted by Harimohan at 11:28 PM