Andrew Neiman and Terence Fletcher play student and teacher. Fletcher is a teacher who seeks perfection from his jazz band and any less is not acceptable. However his ways are abusive and his students are terrorised and demoralised. The movie revolves around Neiman and his relationship with his teacher, music conductor, going from awe to hate, to anger and frustration and finally perhaps, gratitude. 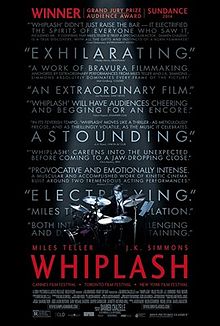 Neiman is a first year student drummer at the Schaffer Conservatory. He is noticed by the conductor Fletcher who gives him a chance, then pulls him down, humiliates him, gives him another chance and then throws him out of the band. Fletcher's work ethic and exacting standards drive the students to despair and one even commits suicide. Neiman himself quits. When he meets Fletcher later, he discovers that Fletcher was driven by his desire to push his students to greatness and was not apologetic. 'I at least tried,' he says. Fletcher says that the two words 'good job' were the worst ever. He also feels that any potential greatness that gave up is not bound for greatness. Fletcher gives Neiman one final chance at a prestigious performance and pushes Neiman over the edge. Will he survive Fletcher's desire to find greatness in his wards?

Whiplash is stressful. Fletcher, played by JK Simmons, is brilliant as the abusive perfectionist teacher. Miles Teller is good as the student. Not easy. But who said greatness came easy. Whiplash by the way, is one of the scores they play.  'Whiplash' is extraordinary - nothing like I have seen before and perhaps brings many such edgy equations to light.
Posted by Harimohan at 11:38 PM