Colin Tipping is an Atlanta based author, workshop facilitator and the owner of the copyright on 'Radical Forgiveness' - a technology which, he believes, can lead one to a state of forgiveness quicker and easier. The idea behind it is that forgiveness being one of our biggest energy blocks to our own good, if dealt with properly, can bring in all we want. His technology is interesting and has many tangible benefits which I experienced as well (as long as I practiced those). Though Radical Forgiveness is his flagship program (of which Shobha is a qualified coach) he also has other interesting programs such as 'Radical Manifestation'. 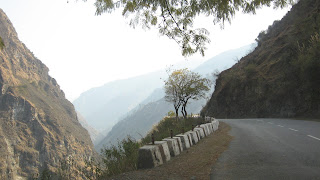 I don't know who discovered Colin Tipping first but there was a phase when a group of us would do all kind of self-help workshops, especially in the 'energy' areas. The first program that we did was the 2 day workshop of 'Heal Your Life' by Louise Hay. Now this is a highly empowering workshop and has innumerable benefits for anyone and I am glad that I did it, thought belatedly (Me and help? Haha). Shobha had discovered Sailaja, who was a certified workshop facilitator of Hay's workshop, and a wonderful and patient teacher too. And it was Sailaja who attended the Tipping workshop in Atlanta and brought the 'Radical Manifestation' workshop to India. We all signed up for a rather expensive workshop and it had an interesting way to test it out. The first premise is to manifest the money for the workshop - based on our intent - and we did. One way or another. That seemed like a good omen.

Anyway, this workshop was done sometime in mid-2007, a period when much was happening (or not happening) in my life. I had written a book which had been signed for publication and shoved to the background for a year. There was an impending baby, rather late in our lives, and the worries that go with that. My big move to leave my job had nothing much to show for in two years except for some debt. Certainly no money. And at that point to invest something like 15K for a program was seemingly impossible - but then we did and attended a 3-day fun-filled, life-changing program at Taj Krishna.

A part of what the workshop taught us, among many other things, was to use the Radical Manifestation worksheet to manifest what one wants. One feels the emotions of lack, states what one wants to manifest, gives up attachment to it, wishing wholeheartedly that whatever is best will happen. It is a worksheet that we need to write in and we all filled in what we wanted - outlandish stuff sometimes, large amounts of money, travel, all sorts of stuff - hoped that it would all come true and after waiting for a day or two for the millions to pour in, forgot about them. It was all very exciting then to live in that state and to allow ourselves to ask for all sorts of stuff from the Universe. Anyway that's not the interesting part.

The other day I found the old file and ran through some of those old manifestation sheets that I had written in and was astounded at what I had asked for and what came true.

I asked for the following in those sheets - 1) sell film rights for my first novel, 2) that we have a healthy baby and many wonderful moments with her/him, 3) a new car, 4) a new laptop, 5) a nice office space, 6) a new couch for our home, 7) a cheque for 3 lakh, 8) a cheque for 5 lakh, 9) a cheque for 1 lakh (at different times, probably because of some need then), 10) a Sony Bravia television (I was so impressed with it), 11) an increase in my retainer to 30 K with a client, 12) several sheets on good health, 13) a direct marketing team to sell the novel, 14) selling rights for children's book, 15) contracts for 'The Misfit' and 16) 'The Tryst', 17) specific panels for book launches at Mumbai and 18) Chennai, 19) a perfect home, 20) a literary agent, 21) a large bank balance and so on. Some were asked in desperation, some were asked flippantly and some were asked as if to test if it works. Obviously the desperate ones worked best.

Of the above I was amazed to find that the ones that were specific somehow manifested - in their own time of course.  The film rights for the first book were sold, Anjali was born and its a wonderful life with her, a new car, a laptop, nice office space, at home, a new couch, cheques, a Sony Bravia came in, my retainer increased exactly to 30 K with that client, The Tryst got published as 'If You Love Someone...', the perfect panels for Mumbai (Sanjay Manjrekar and Ayaz Memon) and Chennai (K. Srikkanth, R. Mohan and V.B. Chandrashekhar, my good friend) happened. That makes it 14 out of 21 that I can see which is huge! The ones which were more specifically and clearly spelled out happened exactly as I wished for them - amounts, brands, names, people, things - and the vague ones were left out. They all happened in their own time too but what hit me was how they all did come true.

I know many who are sceptical and think its all mumbo jumbo. But I believe that not everything can be explained through science, not yet anyway, and do believe that there is an energy at play which we can access and use for our and greater good. But all said and done I think the above list presents a serious case for making lists, setting goals. There is an energy at play when one can visualise a clear thought and leave it in the Universe. The clearer one is, the better. We can certainly leave some good thoughts for ourselves (instead of scaring ourselves silly), for people around us, and hope they come true. No harm done.

And certainly a huge case for Colin Tipping and his Radical Manifestation technology which can be found on the net. Much thanks is owed to Sailaja for bringing it into our realm. And if there's is one thing I have learnt, it is to keep at something that's working. So onward for more intentions and manifestations.
Posted by Harimohan at 2:11 PM

Maybe the story of Alladin and his lamp had this as its underlying message..anyway, I am now wishing for a single malt every quarter of my working life- brand Laphroaig or equivalent. Very serious- Fool's Day is behind us now.

Raja, Clear visualisation of brand Laphroaig single malt and the pleasure it brings to be felt, and lo, the genie brings it on. Sometime, somehow. The genie is not hot on punctuality but is generally reliable though.

Raja, Clear visualisation of brand Laphroaig single malt and the pleasure it brings to be felt, and lo, the genie brings it on. Sometime, somehow. The genie is not hot on punctuality but is generally reliable though.

You have a great blog. Really like reading your stuff. I recently came across the "Radical Forgiveness" book by Colin Tipping and felt his Radical manifestation tool would also be good. It was nice to read your experience with it.
The worksheets are available for free on his website, which is nice. Keep posting more on your experiences and tips on manifesting....