Cars first.
Was in Bangalore last week for a short trip. Decided to drive down and started off early. We were at Shamshabad airport by 545 a.m. and 7 hours later passed the Devanahalli airport outside Bangalore. I never do over 100 kmph on my Santro, so I think it's pretty good time. The road was in top condition and we paid some 480 bucks on toll but its well worth it. As for decent stops where one can stop with the family, the one that comes to mind is the Bharat Petroleum dhaba someplace near Penugonda. There is one Bharat Petroleum dhaba someplace after Kurnool or just before it on the way back from Bangalore. These two places ensure that considerable distance has been put in on the road before the stop.

The road being so good I had a tough time staying awake on the return journey. Never had this problem before even on long 12 hour drives. You need something to keep you alert, someone talking and keeping things going beside you, else you could doze off out of sheer boredom. Or use that thing that sets off the alarm behind your head!

Buses next
The 335E saves the day again. From Vandana's house to the bus stop at the Old airport road - and then within five minutes you get the swanky 335E at the bus stop. A mere thirty bucks and half an hour later in air conditioned comfort I am getting off at Richmond Circle and walking off to Keerti's house. Same on the way back. I love this bus. Why can't they have 335 E everywhere in India? In the world? Why doesn't someone make a movie on 335E?

Trains - Bangalore Metro
Vandana, indefatigable as ever, suggested we ride the new Metro from Bayappanahalli to MG Road, sip a cup of coffee and head back. It is an imposing station, this B'halli, not just because of the name. We parked the car and got searched for dangerous stuff on us by some security types, got the handbags scanned as in airports and took the escalator up, up and up. Bought tickets (no return tickets please and everyone who is under three feet height is exempt) so we bought tickets which turned out to be round plastic tokens. At the turnstile we passed the token over a scanner which let us pass. (Keep the token with you till you get off else that turnstile won't let you go and you will be shuttling between B'halli and MG Road for the rest of your life!) 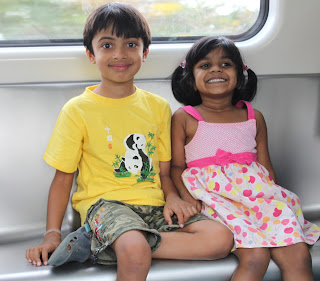 Anyway the metro arrived, small and compact. The engineers carefully left out a gap between the platform and the train in the most dangerous fashion where you have no chance of saving your leg if it gets into that gap. Of course they are all the time telling you over the PA system to take care not to put your leg there. Why could they not think of doing something better so people don't put legs in that gap in the first place is what I don't understand. You got to see it to believe it - its just enough to go and get stuck. Anyway once past that dangerous hurdle we got into the train and it was nice and swanky and it advertised that we were now on the Metro and what the next station was and which side it would come up and please watch out for the GAP between the platform and the train!

The metro sailed over the buildings and the kids Anjali and Seshu had a good time, as did the rest of us and in no time we were at M.G.Road. On the way out we were asked to put the tokens in a slot at the turnstile and were let out. We walked out on to the MG Road and I found that the Metro station was really unwieldy and ugly looking on the once handsome MG Road. Anyway that's the price of progress. We walked to a nearby coffee shop and ate large club sandwiches and drank juice and stuff and headed back the same way. Nice.
But just watch out for the gap between the platform and the train!

like the proverbial one between the cup and the lip..but it seems you got your coffee all right.