It's a tale of historical fiction published in 1905, set in the times of the French Revolution. Several French nobles were facing the guillotine and their only hope is one unknown Englishman, who with daring and ingenuity, is spiriting away some of them. He only leaves a symbol - a flower - a scarlet pimpernel. 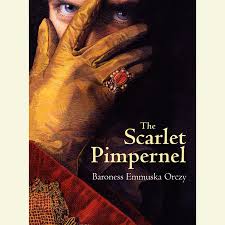 The French want their hands on him. They search for him in England. They even blackmail Lady Marguerite Blakeney, a Frenchwoman, married to an English lord. Marguerite is considered the cleverest woman in Europe while her husband is seen as a dull man who is rich and nothing else. Things begin to happen when Lady Marguerite's brother leaves behind incriminating evidence and she is called on to help the French in finding the elusive hero, the scarlet pimpernel.

Good fun story. At least now I know what this term means.
Posted by Harimohan at 3:11 PM