Having slept at a decent hour and minus a drop of alcohol, I also decided to watch the sunrise at Tankbund. This involved getting up by 530 pm and it's pretty cold these days but I managed to do that and left. It seemed a bit hazy and it took me a while to find a place to park near the Eat Street, Necklace Road. From here we get a good view of the sun rising over the waters across the Hussain Sagar lake, from behind Tank Bund. I was needlessly worried about missing the sun because the sky was already coloring up a bit. I walked to find myself a suitable place to watch the sunrise.
Firstly I found that the Love Hyderabad sign was also here. Youngsters were clicking pictures on it - straight after a night of partying surely - going by their garish dresses. There were several such groups. I spotted one group of MCH sweepers in conference - probably gearing up for the hectic task of cleaning up the trash left by revellers of the night. It was an impressive congregation.
I walked past a bunch of youngsters playing a game - they had blindfolded one girl and she was trying to catch them. I ran away when I spotted her headed in my direction. I saw a couple of youngsters sitting casually on the stone seats and drinking their beer, engaged in some deep discussion. acche ghar ke hai, bungalow hain etc.
Some office groups were there. Couple of young lovers were there, catching up on the 1st. I saw some broken beer bottles. All youngsters were playing and having fun. All oldies were seriously walking acting as if they do not care about all this unnecessary happiness. So what if its New Year? they seemed to say. One old man was actually fixing up a marriage proposal over the phone -
I found a place and clicked some pics of the lake minus the sun. Then the sun appeared diffidently and only half. Then it rose and showed up in full. It rose until it started to make a path across the waters straight towards me and I waited until I felt the path reached me. For perhaps the first time, I felt where I was - on this earth, that had somehow revolved around the sun in its orbit, and there was the sun right there in front of me, and the hugeness of this whole affair hit me. I walked some more, clicked some more pics.
I the turned around and sat for a while. I could see young school kids playing football and they seemed the most in the moment of all. Full of fun and intense concentration - like the Zen book says - with no gainful idea except to fully play. The older youngsters were certainly on some gainful expedition - winning the attentions of the fairer sex was one surely. The older ones were completely lost in gainful ideas and were far away from fun. 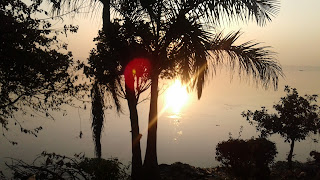 I realised I needed to be less gainful. So I took off my shoes and socks and stepped on to the wet grass. It felt delicious. I walked around here and there, stretched a bit and felt very 'in the moment'. Satisfied with my spiritual practice which instantly made me superior to the rest of the world, I got my shoes back on and started the walk back.
I saw the interesting way some of the buildings on the slum across the road were painted. Huge paintings - one whole building painted beautifully with the picture of a young man watching his mobile phone intently. They got that expression so right. And other houses too. Wow! Very creative idea and very well done too. Appreciate the painter.

I walked to the car and headed out. I had a breakfast meeting with Vasu so I drove to catch him at KBR and from there to Taj Mahal. I would have loved to go to the Taj at Abids, and realised that perhaps Vasu would have come to Tank Bund for his jog if I had asked him - a little later. Anyway, slowly does it. One thing at a time!
Welcome 2018 then. More mindfulness, more Self 2 and more decisions.
Posted by Harimohan at 1:27 AM