The Autobiography of an Unknown Indian - Nirad C Chaudhuri

Disappointing in so many ways. A very limited upper crust view of the world which somehow did not change even at the time of writing the book in his later years. Beautifully written and very evocative mind you - I cannot forget the pictures he paints - but the shallowness in thought and superciliousness in attitude is something I cannot ignore. He loves his essay that he wrote in college so much that he published it in its entirety. 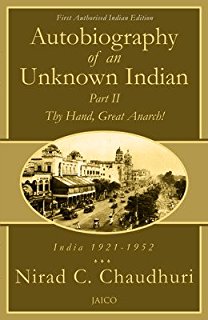 If there is one thing that remains in my mind as something that struck me as interesting it was that the upper caste women in Calcutta, in their need to be pure, refrained from all sorts of impure stuff. One such impure item was stale food. So to avoid any contact with stale food, which includes the clothes they wore, they would cook in the nude. I have not heard of that before. The book gives a great insight into how upper class or rather brahmin families lived in rural Bengal, his move to Calcutta and the subsequent difficulty in adjusting, college days and so on. He is unduly harsh on one lecturer as well and one wonders that as one grows in life, one becomes more compassionate to others and their faults and weaknesses.

Nirad Chaudhuri's book was published by Jaico so that puts something in common between us. Perhaps I should read another book of his to form a better opinion of him, his work. No denying his mastery over writing though, but that's not everything.
Posted by Harimohan at 4:09 PM