It's been a while since the HLF came into being. From the first edition at Hotel Green Park where Prof Shiv K. Kumar was the Chief Guest the festival moved to Taramati Baradari where I met Krishna Sastri Devulapally and Chitra. Krishna and I were part of a panel of Hyderabadi writing with Vamsee Juluri. Then it had an edition at the Maulana Azad Urdu University where I moderated a session for Anita Nair. And one at a place in Banjara Hills near Saptaparini where I moderated a session on Indian cinema for Vamsee Juluri. Then it moved to the Hyderabad Public School where I moderated a session with Ramnarayan and Vijay Mohan Raj on cricket writing and did one workshop for school kids on cricket and lessons from it. And now, this year Vijay Kumar asked me if I could moderate a session with Rajdeep Sardesai on his new book 'Democracy's XI'. 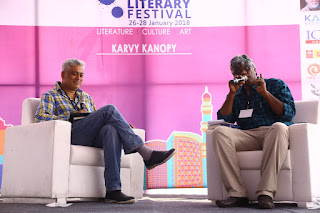 What I found interesting is that we (moderators) are expected to buy our own copy of the book and moderate the session. I asked Vijay if he had a copy and he said no. Which probably means buy your copy or come without reading the book. Maybe the publishers should think about this and lend us a copy. Thankfully Vinod saved me once again and got me a copy which I read, but seriously. I was all set to walk in minus reading the book if Vinod did not have the copy. Rajdeep was capable enough to handle the show himself.

On the D day I went in at 1230 to catch up with Rajdeep and share my line of thought. I spotted Rajdeep heading to lunch and walked up to him. He was not unduly worried about my line of thought and said we could catch up in the author's lounge before the 2 pm session of ours. In the lunch area I met one of the officials who invited me to have lunch and generously gave me a couple of coupons which I was eligible for as a delegate anyway. But since I had eaten a bit of lunch and also did not want to eat right then I said I already ate. 'You ate lunch already,' he said and grabbed the coupons out of my hand. I just could not get it. I don't think there was any food shortage. I don't see what two coupons that may go unused for lunch would do. Maybe there was something I missed!

While waiting in the author's lounge I met two young romantic novel writers - Ravinder Singh and Sudeep Nagarkar, who were having a session at 2 just like we were. Sudeep was quiet and modest. Ravinder was the star. Rajdeep came in some ten minutes before and we spoke a bit before we headed out to the venue. The young lady who led us to the venue recognised me and said she saw me at VNR VJIET when I had gone to give a TEDx talk. She asked me if I would come this time again. I said I would if they invited me.

I thought  too many people may not know Rajdeep's connection with the game I made sure the audience knew where he came from - his father Dilip Sardesai was a famous Test cricketer and a member of the 1971 West Indies and England tours that India won overseas for the first time, Rajdeep himself played first class cricket for Oxford and Combined Universities and as a writer he had already written a book. Of course every knew him well as an award winning TV personality. Again, i am not sure if too many people are aware that he is married to another famous TV personality, Sagarika Ghose.

That said, I asked him to set the context of Indian cricket's history and India as a country by leading us through the period of cricket right up to 1971. So he spoke about the Pentangulars when the teams were drawn on communal lines (Parsi, Hindu, Muslim etc), about the royal influence on selection, about untouchable players etc. Then I asked him to lead us through the first of the four periods he mentions in his book - the 1971 tour and how it affected India, the World Cup win in 1983, the liberalisation and then the IPL. Rajdeep spoke with increasing passion and the crowd simply loved it. He spoke well of Jaisimha and of Azharuddin.

There were many questions and answers. Lots of energy. Session well done. Rajdeep was warm in his thanks. I was glad it went well. Shobha bought a copy of the book and Rajdeep signed it for us. I gave him copies of 50 Not out and TWIED. That ended HLF 2018 for me. But I suddenly realised that I am moderating more sessions than being a panelist on. Especially at the HLF!
Posted by Harimohan at 4:14 PM