It's disappointing after the book but in its defence, the movie is not made based on the book. While Avirook Sen had the luxury of writing about the case as he saw it unfold in the court, the movie keeps it loosely based on the real story but fictionalises it, at least as far as names go, but stays close to the story as other facts go. I have no idea about the personal life of Ashwin Kumar or the Investigating Officer Paul and whether he actually conducted an investigation with a child around him but from whatever we have seen or heard, anything is possible. 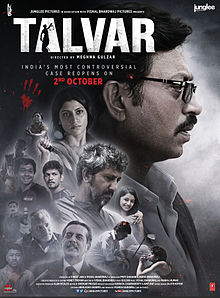 I felt the movie somehow passes the main issues by at a slightly superficial level. Or maybe I felt that because I am biased towards the book which gives far more detail. Of course the filmmaker has to make it entertaining and still tell the story and can tell only so much coherently. But still I felt something missing.

There were new angles in the movie though - the interplay in the CBI, the early retirement of Ashwin Kumar and some other angles. The cops apathy and inefficiency was brought out brilliantly. More than anything it gave visual constructs for me. But it never told the parents story effectively. The moment they were tainted without any basis, they were pre-judged by everyone on the side of the law and then it became easy to first arrive at the sleazy culprits, then build the story and look for matching evidence (and discard contrary evidence like when two people are killed in the same room how can someone wipe out the blood of only one person?) On such processes and evidence are people sometimes convicted. The entire chain in this case - from investigation to the judgement - needs to be examined again as a case of how things should not be done.

Irrfan Khan and Konkona are good as always. The supporting cast was good as well. I liked the performances of Prakash Belawadi as CBI Chief Ramashankar Pillai and Gajraj Rao as the paan chewing and mobile phone wielding cop Dhaniram.

Posted by Harimohan at 6:23 AM