Life is stranger than fiction. In fact if we want the most astounding stories all we need to do is look around in real life and we find them. One such is the story of the racehorse 'Seabiscuit'. One could easily be led tot think that this was a story written by an overimaginative writer looking to add drama into a story but well, this is a true story. And guess what, the canvas on which it is painted is the time of the Great depression in the USA. The 1930s. The stock markets crashed, unemployment was high and the people needed hope. An underdog story. And Seabiscuit provided the perfect story. 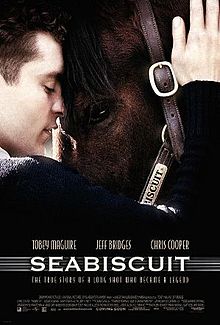 Coming from well bred parents Seabiscuit was known to be a lazy horse prone to eat and sleep for long hours. It was obviously a horse that had an attitude and it showed it consistently. Its jockey Red Pollard is another person with an attitude. After his parents lose a fortune and move to seek employment, they leave Red in the care of a horse trainer who spots Red's talent with horses. Red has a hard life but he learns to jockey and look after himself. He has a temperament similar to Seabiscuit - never gives in. Trainer Tom Smith is one of this kind too. Unconventional in his approach, enough for him to be seen as an outcast, but with deep compassion, he takes care of people and horses in his own ways. This aspect of this quiet trainer catches the eye of another rebel, Charles Howard, a successful car salesman, who was among the richest in California, but who has lost his son in an unfortunate car accident and then his marriage. He starts finding a new life after he meets a new wife who loves horses. How these four unconventional, underdogs with their broken pasts behind them come together to form a story of how successful teams are built, how champions are made, how the world is changed is what Seabiscuit the movie all about.

Considered to be smaller, and a loser Seabiscuit is the butt of jokes. In fact when he suffers a broken leg the owner looks to shoot him. That's when Tom Smith steps in and takes over the broken horse. While looking to find a jockey capable of handling Seabiscuit's ways, he sees Red Pollard fighting four jockeys. Red is frequently getting beaten up in boxing matches (which cost him his vision in one eye) but he never gives in. Howard sees Smith's compassion to his horse, shows care and compassion to his angry young jockey who is secretly hurting from the abandonment of his family, and we have a jockey who is willing to put his life out. The horse sees a kindred spirit and responds and soon Seabiscuit is winning races. The small, broken, underdog is winning. It challenges the big horses, the biggest being War Admiral, a superior horse. Unfortunately before the big event Red suffers a big crash and fractures his leg. Seabiscuit, ridden by his friend Woolf, beats War Admiral comfortably. In this race Red reveals his innate knowledge of Seabiscuit's character, that if 'he looks his rival in the eye, he will never lose the race'.

You'd think it was over, But both horse and jockey overcome great physical stress, Seabiscuit recuperates from a torn ligament which effectively puts him out of racing according to the vets, and Red whose fractures are so bad that doctors fear he may not be able to walk again if he damages them. They recover, take part in the Santa Anita race, and win by a clear margin. There is help from Woolf too who rides the race on another horse and gives Seabiscuit a 'good look'.

Its an extraordinary tale. Seabiscuit has statues installed after him, two movies made, one book written and was the source of great hope and inspiration. 'If a little guy doe snot know he is little he can do many big things,' says his owner Charles. If the kitten only sees a tiger inside he will behave like one. As leaders one can only see that spark and encourage it. Howard's understanding of human spirit, of compassion, helps him hire Smith. His dealing with Red as his own son, fearing for Red's safety in the last race, shows what true leadership is about. Woolf's knowing his role and acceptance and his own greatness in stepping back cannot be underplayed. Its a fantastic story with many lessons. Must watch. And perhaps a must read too.
Posted by Harimohan at 9:19 AM

This is one movie I can watch again and again. The first time I watched it was on a flight and have watched it a couple of times later.I love feel good movies and those showing underdogs winning in the end. I am a soft touch for those kind of movies. Lovely review by the way.