The motive was fuzzy. If the villain did use the one man's finger prints which lead into the safe and rob the jewels, the police should have had no problem finding out where the jewels were hidden right? Only one man can open them and he is right there in their custody. So where are the jewels? Ok, I was with my boss who gave me a drink and I don't remember what happened. So he cannot say. Who stands to gain? Why not check on him? But then we cannot ask these questions because then we don't have scope for revenge. 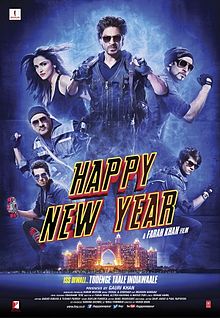 So enter son of man who was unfairly accused with motive for revenge. Two more chaps share his angst. Two pros are recruited for special skills - one of which is puking at times most unwarranted. Get a dancing babe and the team is complete. All we need to do is enrol in a dance competition, rig the voting system, win the prize, go to hotel next to safe with jewels....(why not just check into that room at any other time?), dig a hole, seduce chap who has only fingerprints that give access...oh its too much.

Anyway all's well in the end. Nothing lost. Nothing gained. Is it a new frontier in film making? No. Is it full on entertainment? Not really unless you like Sajid Khan type of movies. Is it totally unacceptable? Not really. Its moving on. Happy New Year. Its like a party you go to but don't remember much.
Posted by Harimohan at 11:11 PM