Those Magnificent Men in their Flying Machines - Movie Review

I watched this movie in about ten instalments which in itself makes it something special. Not that it was boring - just that it happened so. In fact it is an amazing piece of film making with the number of different kinds of planes, flying stunts etc. The cinematography is exceedingly beautiful, the locales perfect. Its a lot like 'The Great Race'. 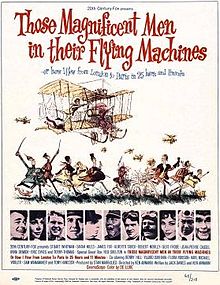 It's 1910 and a British newspaper magnate, owner of The Daily Post, announces a race in flying machines from London to Paris. The obscenely huge reward attracts adventurers and flyers from all over. There is an American, a German, a Frenchman, and Italian, a Japanese, and all of them play stereotypes. The race starts with fourteen planes but some do not take off (sabotaged by an  unscrupulous competitor). Some planes crash midway. Four of them make it.

The planes, the scenery, the perfect period settings, clothes, cars make it a visual delight. Enough in the story to keep it going too. Lots of funny characters. I cannot imagine any movie being made like this one though. Very unique. For a 1965 movie it boggles the mind to see the amount of thought and precision and money spent on the sets, the planes the visuals. Unique.
Posted by Harimohan at 4:12 PM