It's one of the cutest love stories I saw ever, with a 'Breakfast at Tiffany's' twist to it. The director apparently said he was inspired by B at T. But save the fact that the girl is looking for rich men to marry, nothing else is similar. 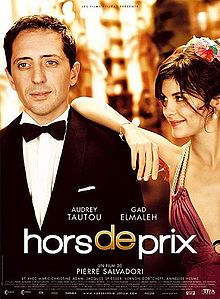 Irene is a gold digger and is looking to trap a rich man to settle down with and get out of the mini skirt, fake smile and bar routine to get by. She is close to getting hitched to a rich old man when she has a midnight drunken dalliance with the young hotel barman, Jean, whom she mistakes for a rich man. Her old man breaks off the engagement when he comes to know of her affair. Irene is mad that all her hard work has gone waste. But she still has this other rich man Jean who plays along now. Irene finds out soon that he is a poor bar man. When she leaves Jean follows her to Cote d Azur to apologise and make up. But Irene has no time for poor guys. When Jean insists, she vengefully squeezes him dry of all his savings, to the last Euro, which he gives her for another ten seconds to look into her eyes.

Jean however cannot pay his hotel bills and is rescued by a rich woman who makes him her companion. Irene has hitched one rich old man herself. Together the two young people figure out how to milk their rich patrons. Jean is madly in love with Irene though and it is only in the end that Irene realises that she loves him too.

One of the top 10 romances in my book. Jean's last euro for the extra ten seconds, his spending all his savings on her, his getting an expensive watch from his benefactor which he sells to buy Irene a classy dress and a week's stay when her catch ditches her are stuff that great love stories are made of. His female companion realises she has no power on him - it seems I cannot buy you out - she says. Very nice. I liked the sensibilities.
Posted by Harimohan at 4:27 PM