It's a movie you can sit through. Bearable. A few moments. And that despite having powerhouse stuff in the cast. Somewhere the film stays on safe ground and never searches for anything extraordinary. But why should they - it's after about entertainment, entertainment and entertainment. Does it entertain? It does enough to keep it going. But its not stuff you'd be running to recommend strongly either. 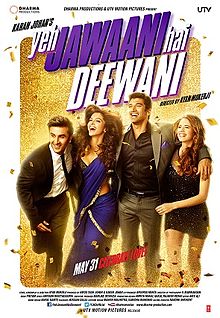 So what's the movie about? Three friends who are really close from school - two guys and a girl who behaves like a guy (Ranbir, Aditya Roy and Kalki) seemingly cannot live without one another. They are headed to the hills for a holiday, a trek at 16000 feet. Quite by chance they get Deepike Padukone, the bespectacled, front row bookworm from school, who is now studying medicine on the trek. Now how the bookworm turns into an alcohol swigging adventurer and how the push-my-limits Bunny (Ranbir) finds her attractive is something that goes on in the trip. Obviously the other two behave like they do not know the other's gender, in fact the two boys almost treat like like she is a boy almost. But hey, Kalki is in love with the handsome and intense Aditya Roy. What happens on the trek is - nothing really. What we get is that Bunny wants raftaar.

Second half shows a marriage, a destination wedding in Udaipur. Eight years later. Kalki is getting married to a rich geek. All the friends come back. Deepika finds that she still loves Ranbir the globetrotting photographer and Ranbir finds that he loves her too. Sadly, not enough chemistry between the two - not shown well at least. It's a thanda romance with a thanda kiss thrown in. Happy New Years and all is fine yaar.

Aditya Roy Kapoor showed a side to him that reminded me of Amitabh in his younger days. An intensity, anger, angst, tragedy - something that sets him apart from any other new comer I have seen the screen in many years. And with Ranbir, its their chemistry that's sizzling really, I was left wondering if someone remade Anand - Ranbir in Rajesh Khanna's role and Aditya in Amitabh's - that would be interesting. For my money this kid is the same stuff that Amitabh was made of and I expect him to go places. Ranbir is superb with his natural ease before the camera. Deepika looks good and holds her own well. But if there is something to be said it is for Farooq Shaikh who sparkles like a crackling fire in the few precious moments that he is on screen. He raises the bar every time he is  in the frame.

A bit of this, a bit of that, characters that don't belong, that don't have strong convictions, some good songs, some time pass stuff. But do you take a great story home? No. Are you sure that there is great love between Kalki and Kunal? No. Do you think Kalki loves Aditya? Yes. Do you think Ranbir and Deepika are going to be happy in their marriage? I doubt it. He will, as she suspects rightly, run away. But what the hell, Happy New Year buddies.
Posted by Harimohan at 9:38 PM