One of the post 9/11 movies as you can make out in scene no 1 when the delegates address one Mr. Anwar. Soon Mr. Anwar is shown speaking to wife Isabella (Reese Witherspoon) who is American. Now you know where this can go from there. But seriously 'Rendition' is based on the true story of Khalid El Masri, a German national who was mistaken for Khalid-Al Masri, and abducted under 'Extraordinary Rendition' practice that US had begun post its famous War on Terror. Under this Rendition they can abduct those whom they suspect of terrorist activities and ship them off to countries where they are tortured. 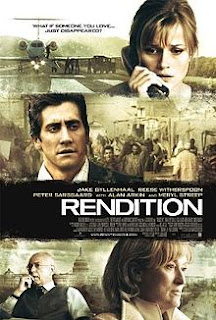 A suicide bomber explodes in an African country killing an American agent and 18 others. The target is the police official Fawal who conducts the torture program for the US in that country. Based on call records, young chemical engineer Anwar is apprehended on his arrival in Chicago from the conference he attended in South Africa. All traces of his arrival are deleted and he is shipped off to Mr. Fawal's care. Now Isabella is a true blue American and she will not take this sudden disappearances quietly. She starts kicking up a storm claiming that he was on the plane because she has records of his credit card purchases on the flight. She soon finds out that the person who may have ordered this rendition is Ms. Corrine Whitman (Meryl Streep) a high ranking CIA official. Whitman is all ice and ignorance. In Africa Anwar is tortured so badly that he agrees to crimes he never committed. Something that the young CIA agent sent to observe the torture, Douglas Freeman suspects.

In a parallel story Fawal's daughter is involved with a young poet Khalid who is also a bit of a revolutionary. She does not know that he is planning to eliminate her father in revenge for the death of his older brother, another revolutionary. The story slowly unveils the plot behind the suicide bombing while on the other hand Freeman helps Anwar escape to America. News of his torture is out in the media and all hell breaks loose. Fawal finds that life has its own ways of getting back and is left to deal with his demons.

It's taut, gripping and tense. It's also a statement on the futility of some of the methods these people use. Meryl Streep is brilliant as Corrine White and Alan Arkin is his usual lovable self. Moral of the story: Use your credit card often, including in flights.
Posted by Harimohan at 10:33 PM