I watched 'Pyaasa; again after decades. Or am I imagining things? Maybe I never watched the movie but always believed I did. But I do remember one scene from the movie, the famous 'Jala do, jala do' scene, which could have settled in off Chitrahaar for all I know. Of Guru Dutt on the steps of the packed auditorium. But whichever way, I did see the classic and am glad I did. 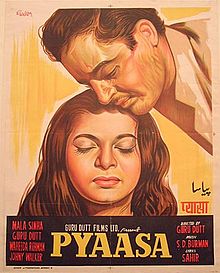 Vasant Kumar Shivshankar Padukone  a.k.a. Guru Dutt's classic movie is soft and gentle, sensitive and romantic, thought provoking and intense. With lovely music, a fine story and some wonderful performances the movie comes alive. Guru Dutt plays Vijay, a poet who wishes to make a living writing poetry. This kind of escapist thinking is not liked by his brothers who taunt him constantly. Vijay, though mollified and protected by his loving mother, leaves home and lives like a vagrant. His brothers, evil chaps, sell off his poetry files to the raddiwala. From the raddiwala the poems reach a prostitute Gulabo (Waheeda Rehman) who falls in love with the young poet's intense poetry. When she is singing one of his poems, in her attempt to lure customers, Vijay accosts her and demands that she give his poems back. She is unhappy that he is not the prospective customer that she thought he was, and throws him out. But she soon realises that he is the poet who wrote those wonderful poems, and starts helping him out (by paying his food bills to start with). She also falls in love with him because he speaks kindly and gently to her, little knowing that Vijay does not know to speak in any other way.

Vijay meanwhile meets his collgeheart sweetheart Meena  (Mala Sinha) who is the chief object of his affections and his pain and the inspiration behind his poems. Meena, ever so practical, realises that life with Vijay will take her to the streets, and breaks off her youthful dalliance with him and marries a rich man Mr. Ghosh (Rehman) who is also a well known publisher. In an alumni meeting Ghosh senses some sparkling, unfulfilled chemistry between Meena and the sad song-singing Vijay and decides to explore it, jealous husband that he is. He offers Vijay a job in his publishing company, as a servant, and keeps a jealous eye on him. Vijay soon realises that Meena is married to his master, Ghosh. He also comes to know of his mother's demise and feels pretty dejected with life.

In a classic twist sometime at that stage, a slightly suicidal looking Vijay offers his jacket to a beggar who is shivering in the cold. The beggar, for reasons best known to him, follows the suicidal-looking Vijay on the tracks and is knocked down by a train (in a scene, which was later copied in Yaadon ki Baarat I think, of the foot getting caught between railways tracks when they are changing). It is reported in the news that young poet Vijay died, and his badly mutilated and unidentifiable body found; information based on his jacket and some papers found in it. Distraught, Gulabo goes to Ghosh with Vijay's poems and asks him to publish them, paying for the publication with all her savings. The poems become a super hit and everyone is reading Vijay's poems. As a nurse reads the poems ecstatically, her almost-comatose patient Vijay wakes up, and talks after a long time. He recognises his poems. But his claims to be the famous poet Vijay are soon dismissed and he is sent to a mental asylum. Ghosh and his friend Shyam do not recognise him, thinking that it might harm the commercial interests but his friend, Sattar the maalishwala, helps him escape.

In a big function held to mourn the death of Vijay, the real Vijay appears. But he soon claims that he is not the real Vijay and is actually an impostor and chooses to walk away from the world of money, fame and deceit. He goes to find Gulabo, who apart from Sattar, has been the only true friend and asks her to accompany him on his wanderings. Gulabo is not as smart as Meena and agrees.

The look on Waheeda Rehman's face when she sees Guru Dutt in the last scene will always remain with me. It is fantastic. I rewound and watched it a few times just to see how anyone could bring such expression of love and longing to the screen. Guru Dutt is perfect in Vijay's role, soft spoken, idealistic and self-destructive. The rest of the characters are brilliantly etched with no ambiguity and each serving a purpose. I loved the character of Shyam who moves the way the breeze blows. Meena and her practical approach, Sattar and his tel maalish. Guru Dutt's movie brings across the angst in every heart, the senselessness of being, the futility of living, and the dangers of growing up and out of the romance of youth into a real world. But in the end it is a love story of a man and his poetry, his inspiration and his ardent fan and his disillusionment with life and perhaps love. His love will always remain Meena and his poetry, Meena's love will always remain money and comfort, Gulabo's love with always remain Vijay and his kindness. In a rather ironical twist, it is the Ghosh family which bestows money and fame to the poet, whose poetry is inspired by Meena Ghosh. And it is Mr. Ghosh, the jealous husband who does not get his wife's full quota of love, who makes all the money from the poet's heartburn, pining for his wife. And Vijay yet again, chooses to walk away from what life offers him on a platter, and goes down the hard path.

More interesting is Guru Dutt's story itself. He is the original Padukone! And for someone who was born in Bangalore, had a tough childhood, did not complete his education for lack of money, he made some wonderful stuff, full of clarity and passion. Thrice married, last of whom was Geeta Dutt, his death, considered by some as suicide, when he was 39, and at the peak of his fame, is also not clear. Alcohol and sleeping pill induced, it could have been a mistake some feel. Guru Dutt was also related to Hyderabad born and Nizam College educated Shyam Sundar Venegalla a.k.a. Shyam Benegal. After spending early years in Calcutta he trained with Uday Shankar's India Culture Center at Almora before moving to Mumbai where his parents were. He got a job with the Prabhat Film Company in Poona and that is where his initiation into films happened. He achieved much in 39 years, directing 8 movies including classics such as Pyaasa, Kaagaz Ke Phool, Baazi, produced an equal number of films including Saheb, Biwi aur Ghulam, Chaudhvin ka Chand, C.I.D. and acted in 16. Some body of work, but more importantly what quality of work.
Posted by Harimohan at 1:06 PM

Everything falls in place in this one. Much better than all his other films, though they were very good too.
His films were also technically superb.

Yes Raja, it was very taut with not a moment or emotion being stretched beyond what was necessary. And lovely music too. I would have stuck with Guru Dutt's original ending of walking off alone instead of carrying off Gulabo with him. Vijay seems to be doomed anyway. (But who knows Gulabo might just give him a purpose to live with her single minded admiration of his work, his being. I guess that's what such artists crave for deep inside, one die hard fan who makes their life worth living!)