Vijay Lokapally is a popular, well-known name in cricketing circles in India and abroad. He has been writing on cricket and sports (and other subjects) for over three decades for The Hindu and other publications. All sports lovers have at some point or the other, read his wonderfully incisive and insightful pieces and I for one have always admired the way he gets to the bottom of things quickly and simply. For some reason, after reading his straight-to-the-point articles, I always imagined that Vijay would be a serious, strict, no-nonsense person. But the Vijay I met was completely different.

As I sat quietly in my chair in the PCA stadium at Mohali last week waiting for the Hyderabad-Punjab season opener to begin, I saw a fiftyish, kurta clad, long haired, jhola wala-type of a gentleman who had 'creative' and/or 'writer' written all over him in the way he walked, talked and cocked his head. He came by near me, tried opening a rather reluctant gate that led into the ground and found it stuck. 'Is it locked?' he asked in that simple matter-of-fact manner of his that makes him so easy to talk to. Absolutely no airs. It did not appear so and I said as much. He pushed harder and it opened and he walked away with a smile. 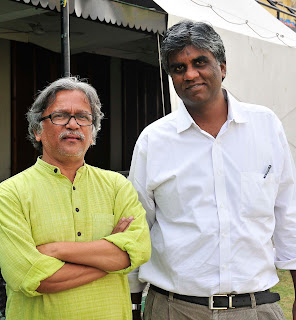 Vijay Lokapally and I at the PCA, Mohali

After a while he returned and asked if I had a newspaper. I had a copy of The Tribune and I gave it to him. We got talking and he told me his name was Vijay and that he was from the Hindu. 'Vijay Lokapally?' I asked, quickly putting two and two together, and he nodded. So here was Vijay Lokapally, I thought. He appeared focussed on his own world, seemingly unaffected by his status as one of India's premier sports journos, and did not throw his weight about as I have seen some do. He had an easy way of talking to strangers, to the men in power, to the younger people, to the waiters - he got his job done without being offensively overbearing or snobbish.

I remembered Satish telling me about how he met Vijay in Trinidad during a World Cup match or some such almost a decade ago, and how they scaled a wall to get their hands on some mangoes. Vijay had then arranged a session of relaxation techniques from the Hapkido school from Satish (who is a black belt and some more) to a few members of the Indian cricket team then. When I recounted that incident later while we were sipping tea, Vijay remembered Satish fondly and the mango incident, and soon we were sipping tea, enjoying lunch together in the press area and talking cricket, Hyderabad and much more. Nothing like Hyderabad chai, he announced on the first day, and we recounted and rated the chai in several Hyderabadi Irani cafes.

Over the four days that we spent together watching the match, we spoke much cricket. We also spoke, among many other things, the new book he contributed to - 'House Full' - on the best of Indian cinema from the 1950s to the 1960s. I could not let one of India's leading sports writers, the author of Sehwag's biography, get away so easily without asking a few questions, so on the last day I cornered him with my questions. He answered patiently but pointedly in that seemingly absent minded manner of his.

Q. How did you get started as a sports journalist?
A. I used to write some freelance stuff but I think the break came when I wrote a piece on Bishen Singh Bedi when he retired, which I sent to the Patriot. Bedi read that piece, took the trouble to contact me, and I met him. He congratulated me on writing that piece and gave me a note of appreciation which I still have with me. Encouraged, I started writing more, short stories, sports writing and so on, for the Patriot. And then when the Asian Games came in 1982 I got accredited and covered the same for the Patriot. After four years, in 1986, I
joined the Hindu and have been with the Hindu ever since.

Q. Why have I became a sports journalist? Chiefly because of my love for cricket, for sports. It is wonderful covering events where there are real heroes - sporting heroes are real heroes as they perform on the
field.

One could start as a sports journalist with a starting salary of Rs. 25000 plus. And the perks are that sports journalism gives you a great opportunity to travel, to meet new people and see the world through a different perspective.

Q. What do you require to be a good sports journalist?
A. You need good, strong language of course. You should have a flair to write. You should understand the sport and more importantly the emotions that go with that sport.

Q. How does one go on to become a sports journalist?
A. There are many good media schools that one can go to study journalism. Almost all media houses have a journalism schools. The Hindu has the Asian College of Journalism which is among the best. Most media houses recruit from their own colleges.

Q. What do you enjoy most about your job?
A. The fact that The Hindu gave me the space to develop as a complete journalist. With The Hindu I could do reporting, write features, write for Frontline and Metro Plus on various subjects (films, music, books).
Reporting is what I like the most. I like the fact that it helps to contribute everyday to readers by observing and relaying to someone who has not watched what you did.

Q. What do you dislike most about your job?
A. Press conferences. That is not creative journalism. I don't like glorifying officials.

Q. What are the best 5 memories or experiences of yours from your three decade long career?
The 1982 Asian Games being the first big event I covered.
V. V. S. Laxman's 281 not out at Kolkata.
Meeting the Bedser brothers in the commentary box at Lord's (London) in 1996.
Meeting Subhash Gupte in Jamaica in 1997.
The 1992 tour of South Africa.

Q. Who were the 5 most interesting people you met?
A: Ravi Shankar, Indira Gandhi, Nelson Mandela, Garry Sobers, Jagjit Singh.


Q: People who impacted your life....
A: In journalism - P.V.R. Menon of the Patriot, S. Krishnan and K.P. Mohan (a flawless journalist) of The Hindu. Above all my parents. I came from a middle class family but my father gave me all that I wanted.

Q. Who were your sporting heroes?
A. Tiger Pataudi, Sunil Gavaskar, G.R. Viswanath, Kapil Dev (asking me to help him with his two books and acknowledging the same generously), Prakash Padukone and Garry Sobers.

Q. Where do you think sports journalism is heading to?
A. Journalism will become more challenging in the future. It will change. There are already new demands. There is a shift towards news from behind the scenes. The format is getting shorter. Everyone is looking for angles. Going for locker room stories.

Q. What has your three decade long journey taught you?
A. I made a lot of friends. I met larger than life heroes who have taught me how to be humble by just being who they are. People like Sachin Tendulkar, Prakash Padukone, Anil Kumble, VVS Laxman, Virender
Sehwag and others. I am also grateful for the fact that I got this opportunity even though there were many contemporaries who were better than me. Knowing that has helped me stay grounded.

Q. What is your advice to budding sports journalists?
A. Be honest when you write and do not get swayed. Be balanced when criticizing a player. There is a thin line between a player's off day and a bad shot or a careless mistake. Remember that sports is about celebration. It is the most positive section in the newspaper. You must enhance that spirit.

Q: Who are the people close to you?
A: My little family-----Sunanda (wife), Akshay (son), niece (Alekhya Rao), Ajay (brother), my dearest childhood friend Ghaus Mohammad (a reputed sports commentator) and my wonderful colleagues K. P. Mohan, Rakesh Rao, Kamesh Srinivasan and Y. B. Sarangi. Working with them is a most pleasant experience.

Q. Any advice for your son?
A. Don't take things for granted. Be prepared for tomorrow. Never miss reading the morning newspaper.

On all four days of the match Vijay was at the ground by 9 a.m., half an hour before the game started. The rest of the sports journalist landed up anytime between 11 a.m. and 1230 p.m. or sometimes even later. He did not miss a ball. Nor did he lose a chance to write a story, to squeeze out an opportunity hungrily as he did. He did a piece on Sunil Joshi and Pragyan Ojha, the two left arm spinners, he certainly got something out of Harbhajan and Laxman, I saw him talking to Bhupinder Singh Sr about the art of swing and reverse swing and so on, he engaged in conversations with Daljit Singh, M.P. Pandove, Secretary of Punjab Cricket Association, Sushil Kapoor, Arun Sharma (Punjab coach), Jivanjot Singh the debutant who got a double hundred, researched some about young Akshat Reddy, and more, had time for chai and lunches with me, picked the people he wanted to write about during the day's play with an astute eye and did his research on them, organised with his photographer the kind of pictures he wanted, and all this in that seemingly forgetful, mild mannered way. One can easily see why Vijay has been so successful - he is extremely disciplined, has a keen eye for opportunities for stories and a big appetite for writing, meeting people and calling a spade a spade. He is a thorough professional who believes in doing his job well, puts in the effort, remains true to his story and is constantly at it.

When we parted on the final day, I promised to send him a copy of 'The Men Within' and he promised to stay in touch and to call me when in Hyderabad next. To me Vijay Lokapally certainly is one of those who leaves, in his own manner, a lasting impression and the feeling that there is much more to him, which makes you look forward to meeting him again. Until then Vijay, looking forward to more of your writing – on cricket, cinema and all else.
Posted by Harimohan at 10:17 AM

I have read him for a long time, particularly in the 80s. I remember the encounter in the West Indies that Satish narrated-about meeting him.

am so glad you have brought out the person vijay is.

i can boldly say, i am also among the fortunate few who can bask in the reflected glory of having known vijay.

this interview is classic stuff that can be passed onto any journalism students class. congratulations on such an exhaustive and informative piece that also educates the students of journalism through the life and times of Viijay.