Anjali came home today from school and after her usual banter about her friends and their antics, turned her attention to the 'lots of homework' she had today. The mood turned despondent for a second, but she strode into her room to get her bag. 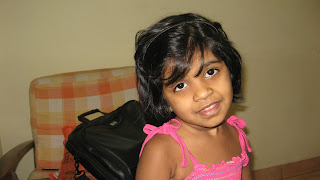 In a couple of moments she was down on the floor with her Maths book open in front of her, writing her 81s, 82s and 83s. As all was going well, I remained silent. After the work was done to satisfaction she looked at me and said 'Nanna, what I don't like I do it off first. That way it won't be there later.'

Ah, Anjali, how I wish I'd known that earlier. I would have got rid of much stuff that I don't like by now! But thanks - never too late to start.
Posted by Harimohan at 2:36 PM