A Heritage Walk in Pune With Kalpak

And our own little heritage walk in Pune. I’ve been going to Pune so often since the early nineties but never made time to go check out some of the heritage structures that were not further than five kilometers from Kothrud. And we want to see the world??

Anyway Kalpak and I decided to strike certain things off the list this time. We quickly zoned in on the plan. The first step to that always is meeting at the usual rendezvous, Good Luck Cafe at Deccan. There we polished off some bun omelette, cheese omelette, chote samose and chai and headed off on his new snazzy Royal Enfield 500 cc. Not more than 2-3 kilometres or so from Deccan we parked the shiny new bike near the Vishrambaag Wada. Kalpak is good company for these kind of visits specially because he has enough knowledge on the background and he kept me filled up on the info as we walked along.

We walked along by the side of the old structure building which now seemed to house a post office and some other offices. We were told at the one official looking ticket counter that being a Monday, it was closed. Disappointment! Anyway we walked up, saw the impressive façade of the building, complete with its rather fancy woodwork. Lots of wood in these structures. This was the residence of Peshwa Bajirao II in early 19th century and was also the place from where he was arrested by the British later, signaling an end to the Peshwa regime. The inside apparently houses a school, a museum kind of a place with some artifacts. Built in 1807, it is in really good shape. Vishrambaag Wada was the centre where several education institutes were started. Rather intriguingly the PMC (which operated in those premises till 1959) bought the property form the British Government. How the British managed to sell something they did not own is a mystery. Currently it is under restoration though.

Then, we hopped across the road to a quiet Tulsi Baug. Most shops were shut being a Monday, thus making one of Pune’s busiest markets rather bearable. We were also lucky to find that this holiday has been utilized to put up photographs of journalists in a street exhibition called ‘Sadak Chaap’. We stared at some lovely photographs and moved on. We wanted to find the Ram Mandir which was somewhere here (apparently the name Tulsibaug comes from Tulshibaug Wada which is the Ram, Ganpati and Shankar temple). We finally asked a young man selling jeans and he pointed out to the temple rising behind the shops.

Next was the entry to the Tulshibaug Ram Temple, through one of the narrowest by lanes opposite a Hanuman temple on the main road. Even as we walked on, one of the Shahbad tiles that covered the drain broke. No serious damage. The temple looked like some work was in progress. It was impressive though with some ornate carvings on the spire. Could do with a flooring I felt around the temple. It is of 1965 vintage. I saw some quaint shops selling small cooking toy utensils made of brass or copper. Very quaint.
We exited from the temple and walked over to the Mandai or the Mahatma Phule Mandai, the vegetable market. It was a beautiful British structure, apparently built in the pre-independence era, with a central office and some eight branches where the shops (526) are located.

It was a lazy afternoon and no one was really buying r selling anything but the fruits and vegetables looked really fresh. We climbed up the stairs and took a look around – wooden steps and well maintained too. Lots of shops with puja items as well. In comparison with the magnificent structure there is the new structure which is an eyesore. I mean, could we not just copy that old structure which is so aesthetic looking? It does bother one to see how our aesthetics have deteriorated and how easily satisfied we are to display our lack of sensibilities sometimes. Anyway we climbed up the parking lot which was some five floors and had a good look around. Nice. Oh, the Ganesh mandal of Mandai is one of the most popular ones in Pune.

Done with the Mandai, we walked down the road to the famous Dadgusheth Halwai Ganapati temple. It is a small temple which is right on the road but with heavy security. The idol is apparently insured for one crore. The temple as built in 1893 by Dagadusheth Halwai a sweet seller. The temple has some history in the Independence movement too as Bal Gangadhar Tilak used the Ganpati festival for public to congregate together. We went in and prayed to the beautiful idol and marveled at the jewellery and the décor. Beautiful stuff.

By now we were feeling a bit low on fuel and found the popular Joshi vadewale right in front of Dagdusheth temple. We ordered ourselves vada pav and some masala taak from the next store and refreshed ourselves. Onward then, to Shaniwar Wada.

As we walked along Kalpak filled me in on the details of the Peshwas and their history. We circled the Shaniwar Wada and its impressive looking walls. The Shaniwar Wada, a palace in the fort, was built in 1746 and was the main head quarters of the Peshwas until the British overpowered them in 1818. We went to the main façade, saw the statue of one of the Peshwas on a horse and then entered the Wada.

Now inside the Wada there is nothing but the foundations because the entire palace of the Peshwas had been burnt down in an unexplained fire! Now this is a huge let down. There are the remnants of a complex fountain of a thousand jets that is shaped like a lotus. We walked along and found a place to rest our backs and watch the sky. The sound and light show was at 7-8 (Marathi) and 8-9 (English). 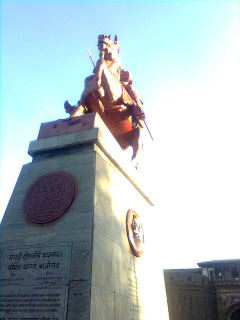 We started back after a short rest, bought some bhel outside and walked back to the bike a good couple of kilometers away. There's much we can do with three hours. A thoroughly enjoyable heritage walk with Kalpak who is just perfect company for this kind of a work. Thanks a lot for your time, energy and wonderful company Kalpak and let's do some more the next time we're in Pune.
Posted by Harimohan at 4:11 PM

Milind Gunaji has written a book about the forts of Maharashtra which I am yet to read. Must get down to it.

There was one by Uddhav Thackeray on Maharasthra comprising of photos shot from air. Beautiful stuff and gives one the essence of Maharashtra. Saw it at Milind's house.