The Annual Day at Daksha School built up momentum pretty early. For the last month or so Anjali would come home and show off some new stuff she learnt - her dance moves or skit lines - and give a blow by blow account of what she and her friends had practiced that day. 'Teacher said this' or 'the others did that' she'd  go on gaily and the mirth with which she shares shows how much she enjoys herself. What got me hooked this time was when Anjali told me that when she goes to school she 'can't wait to get on the stage and tell my lines!' Wow! That's a nice state of mind to be in. 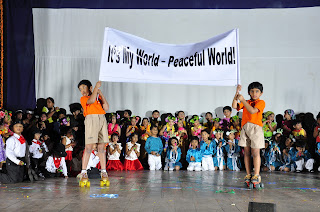 On the given day, 12th of January 2012, we (Shobha, Mythily, Anjali and I) landed up at Ravindra Bharathi, the venue for the Annual Day, dropped Anjali off and headed off to the old Kamat Hotel next door.
Now I have fond memories of this hotel from as fa back as the mid 70s when we would visit it with our father during our trips to Hyderabad and eat large slabs of chocolate ice cream and wonder how to eat a tutti frutti which was a tricky customer if there was one. Kamat still has the same welcoming smells of sambar and agarbatti, the same decor and seating arrangement and we ordered our idlis and wadas and puris and coffees. Manasi's parents, her brother Kushal and grandmother (Anjali's best friend along with Harsh) were at the next table as were many other parents. We trooped back in at 930, found a place at the back and were joined by Chitra soon. And then, the program began.


A welcome song by tiny tots (who would either sway off, not move or perform in their own manner in a most adorable manner) began the proceedings. We smiled, laughed and appreciated their effort under the spotlight. Then, there was a Malay dance followed by a Mexican dance, a Chinese Fan dance, an Arabian dance, a South American Samba, a Japanese Umbrella dance, a Texan Cowboy dance (Anjali was in that along with Harsh and Manasi her two partners in crime, and several more of her friends), a Hawaiin dance, a Spanish salsa, South African dance and to round things off, a robust bhangra to a fiesty 'Rang de Basanti'. Now if that list does not take your breath this surely will - all of them were performed by children  from the Play Group to the 1st class.


As we watched the children troop in with lovely costumes and props, each of the dances choreographed and practiced with such care and love, it filled the heart to see the young ones enjoy themselves so. And even more so to see teachers support the kids when they make a mistake, exhorting parents not to be harsh if their children fail to perform on the big occasion. That the children came on the stage and participated was more than enough for them. Some children enjoyed dancing, some enjoyed doing something else (like walking about or going off stage or talking to their friends or just doing whatever pleased them at that time) and some enjoyed just being there. Wonder of wonders, no child cried, and almost everyone got into the act. With the older children, the acts were almost perfect - everyone performing in a most confident manner that belied their tender years, holding on to every step and beat and completing their final posture until the curtain fell. I enjoyed each and every dance, marveled at the children's confidence and patience, and was all admiration for the teachers. Oh it was superb.

And then there were the skits. The English one by PPII about how we take our Universe for granted, the shift towards mindless consumption and production, the destruction of trees for factories that produce more, the generation of garbage as we consume things we do not need and the consequences of our acts. Anjali was in this one and she plays a consumeristic 'human being' who is rather fond of chips and who throws the packet into the garbage dump that is the world we live in. I found it very thoughtful, entertaining and impactful. The moment the children look at the audience and say helplessly 'can someone help us' wrings your heart and you know that you must not abdicate the responsibility you have to the Earth. The idea of recording the children's dialogues in a studio was brilliant as it made the skit so much more enjoyable and surely contributed to far more confident performances from the children. Well done all of you. You have certainly made an impact on all adults and the children. Going by Anjali's responses, I am sure that we will see a more caring and responsible generation coming up.

The Sankranti skit 'Oorlo Sankranti' was certainly a popular hit because we do miss these festivals, miss the rural setting where India's heart really beats and it was a heartwarming eye opener for everyone. Again solid performances, good settings, great dialogues and a lovely climax. In addition to the fun quotient of burger loving, mall crazy children of the cities, there was the important message that we must not forget our roots, our culture, and came out strongly through the skit. I know Anita feels strongly about it and I endorse her views fully. It is not only important but necessary to know who we are, where we come from and what our histories are because it forms a crucial component of understanding where we want to go and how. Everyone enjoyed it specially the older generations.

The Hindi skit 'Ek Chitti Bhagwan ke Naam' was about a child whose parents are too busy and do have not time for him. It brought home the point that the most valuable thing we can give our children is our time and not merely admissions in good schools, food that they like, expensive gifts and so on. I think many parents would have squirmed in their seats at the dialogues when the parents in the skit urge the child to watch TV or do puzzles when the child actually wants to spend time with them (I did). I won't be surprised if many parents start spending more time with their children after that skit (I will). Well done and well thought of. In a five minute presentation you posed a huge question that troubles this generation of nuclear families and double income parents. Certainly the answer lies within us and we must make time for what is most important to us.

In her Annual report Anita, founder of the school and good friend, spoke of how the school took a decision to start the 1st class and how it was a good mix of a well-designed curriculum. The curriculum is designed by an expert Ms. Asha (who came on stage) which shows how much thought goes into all this seemingly playschool activity. I believe that if, in these formative years, children get a healthy outlook it can completely shape their viewpoint of life. I find the huge empowerment that Anjali gets now as she reads her books by herself (reading off even big words like 'continue', 'favourite' and 'reliance' as she tells me) and thereby creates her own world. Anita thanked everyone and called everyone from her school on stage and the applause said it all. Wonderful stuff. 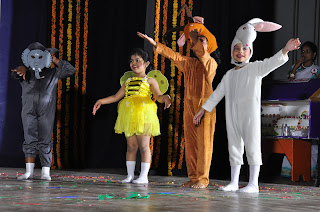 But to me the best moment of the day came at the end when the compere Ms. Hema interacted with the audience. Sirisha, Anita's sister-in-law and a practicing doctor in the USA, who landed that very morning spoke in glowing terms about the good work done by Anita and the team. A few other parents and grandparents shared genuine and spontaneous reactions to the exquisite show. But no moment captured it all better than when Anita's fourteen year old daughter Shreya spoke about how proud she was to see what her mother had done, and how hard Anita worked to put this show together. As she spoke Shreya broke down and it required a big hug from her mother to complete a perfect moment. I am so glad Shreya spoke and reacted so spontaneously because she brought out feelings that were probably bubbling up inside for most. I felt exactly how Shreya felt at that moment because I was overwhelmed by the sheer effort that went into the show. These children are 3 to 6 six year old for god's sake. To make them perform and more importantly to make them enjoy it is a huge achievement. And for Anita to set such aspirations to look up to for Shreya, her son Rohan, and certainly her set of admiring students (including Anjali) through her actions and her manner is itself one of the biggest testimonials to Daksha and its spirit. Always caring, always thinking, always putting in effort and preparing, always trying to better themselves - children learn much from just observing, imbibing and imitating the adults they see in their school.

The Annual day at Daksha is all about preparation.The detail, the care, the balance, the right earnest and the intent. There is just no compromise on effort, yet they are most sympathetic to each child, knowing that it is the effort that matters so much more than the result. It is the quest for perfection that gets you. You only see a part of the vision through Anjali's versions, but you know where it is all heading to. And having known Anita and having seen her team in action over the past two years I know one can expect nothing less. Their desire to push for new boundaries when something simpler or easier could have sufficed is what sets them apart. Well done Daksha, Anita, Radhika, Kamakshi and your entire team. You have surpassed yourself this time.
After the loud and happy byes we headed back. It was a happy and tired Anjali who sat in the car, lost in her thoughts. When asked if she was tired she smiled mischievously and said they were dancing backstage to all the other songs as well. And that's Daksha for you!
Posted by Harimohan at 11:47 AM

I remember watching a tape/Cd of the last one-that was fun too, but on a smaller scale.

I am amazed at how much effort teachers seem to put in with little kids. I vaguely remember participating in some drama on stage while in the 3rd grade at Carmel School on our annual day.

Your mention of the Kamat next to Ravindra Bharati brings back memories too!

Really nicely captured Mr. Harimohan! It is always pure joy and a complete honour to compere a performance into which so much labour of love has gone! I have seen many Annual day functions in this lifetime..being a mother to 2 teenagers now..but this one totally blew my mind with its flawlessness!! Cheers!!

Yes Raja, I think a couple of years ago. Loads of singing and dancing and fun even then.

Satish, That is something that amazes me too. The best thing is that it all shows so clearly. Kamat stop next time!

Thanks for writing Ms. Hema. I must compliment you on the good job you do while compering the programs, every time.

Thanks Harimohan for sharing - even though we missed the annual day event your blog captured it all. Great job by the kids, staff and especially Anita. Touching note on Shreya too...