A Walk in The Park

There is a little park that I visit every other day. It is interesting to see the goings on in the park at various times during the day.

Early in the morning, even before dawn, we have the really serious walkers  and yoga practitioners walking about and contorting themselves silently like ghosts. This is a time when everything is really tranquil and no one dares to even switch on their mobiles and their music players. All music is heard through head phones - the silence is so intimidating. The lake is deathly still without a ripple, the only sounds are those of bird calls and soft footsteps and perhaps the breathing of a desperate pranayama practitioner. 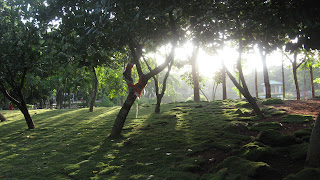 As the sun rises and we go the other side of 6 a.m. we find the noisier public joining in. Encouraged by ambient sounds of traffic and people talking and wishing one another loudly, some of these walkers start playing music on their mobiles, loud enough for a kacheri. Devotional songs, suprabhatam, Hindi film songs, Telugu film songs, FM radio - everything is game as they walk around with loud music in their hands, No one can escape it. Some play this music while they exercise, the music playing loudly by their side. Some carry it along in their hands. 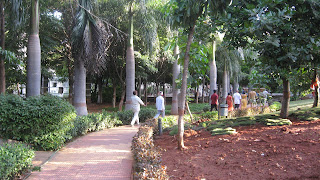 And then come the party goers who normally walk in a pack and who have old friends in their regular places. Their general talk is about how the party was last night, how the drink was, how much more to drink and so on. They occupy the entire walkway and do not move an inch lest they miss out some golden words of wisdom on the drink and food. Others normally duck and weave, swear and suffer, slow down or choose alternate routes to avoid these. These gangs also get upset if anyone occupies their regular space. By now there is much raucous banter, less walking and more time pass. Also this gang has a lot of health issues that they keep discussing. In sharp contrast to this loud gang is the quiet and well behaved yoga gang which goes about with utmost and sometimes rather overtly supercilious humility, content in the knowledge that they are healthier than the others. 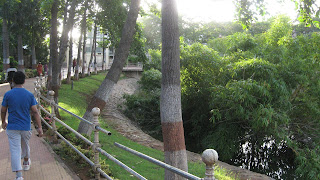 There are young lovers who come on the pretext of an early morning walk or a game of shuttle but they are all flirting with one another. There are old people trying to extend their lives through some exercise. There are those who are struck down by some debility already and are struggling along. There are young joggers who fly about and there are middle aged uncles who huff and puff behind fat tummies tucked into tight t shirts. And by the side are those who are doing their own brand of exercises, some weird ones that we have never seen, some breathing exercises that are a hybrid variety of all one has seen where men and women snort like horses and then some who insist on clapping or making such harsh sounds. Much activity goes on during this hour. 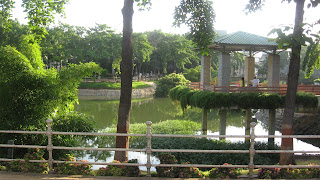 Slowly as the hour of exercise fades and people go back to their homes to get ready and go to their workplaces, the lazy ones who wish to sun themselves troop in with their newspapers. They make no effort to walk or run and merely park themselves in the park and read the newspaper in complete silence. These are the unemployed people and are quiet content with their current state in life. A few couples might catch up on an early morning rendezvous but then that is about it - perhaps a couple of aged people at best. The sun is now beating down and the birds have beat it as well. 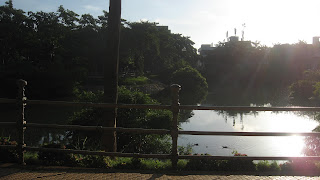 As the day progresses the park is generally taken over by lovers and their faithful followers, the voyeurs. Couples find excellent spots to express themselves. Some neck openly with boys trying to go further and the girls trying to prevent progress, some are content at holding hands, some merely talk and some do not even talk. You can easily make out which stage the relationship is in by the number of smiles and tears and angry faces. Voyeurs also find excellent spots, like combat soldiers, to view the amorous activities without being disturbed. And so continues the time of intimacy which leaves lovers hot and flushed and wanting more. Same with voyeurs. 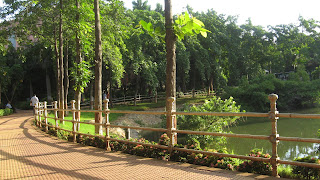 The evenings are for families. Little children, mothers, fathers, uncles, aunts, grandparents, prams, toys, food, ice creams, running etc takes over the park. Some lovers, some exercisers, still remain. But now there is total chaos. Pickpockets have a field day and slowly the park drifts to a quiet end except for some rustling behind the bushes that the security guard investigates and lest off with a small personal fine.

The night belongs to the boozers or the more adventurous. And as the day turns into night much drama happens to the human life while the animal and plant life go about smoothly with their lives in an unaffected manner, undisturbed by the prospect of death, not worried about hypertension or diabetes, yoga or walking.

Back to another day at the park!
Posted by Harimohan at 9:26 PM