We got to Charminar at 715 and spotted Mr. Anjaiah sitting in his designated place under the Charminar. In a short while Mr. Sambrani, our guide, and Mr. Siddiqui Mr. Anjaiah's assistant showed up.

Tickets were bought at 50 bucks a head. Mythily, Monica and Harsha joined us today. Two other tourists came by, one was Mohan whom Shobha had recently met at a Meetup. Just as we were leaving, a couple of young Germans working in an NGO (WASH) came up and joined us. I love the way they travel around in India.


First stop is the Unani hospital which offers a great view of Charminar and Mecca masjid since it stands on an elevated space. The hospital was built in 1929 under the post-flood development scheme. (Unani is a Perso-Arabic system of medicine which was practiced in Mughal India.) This hospital is one of the biggest Unani hospitals in India and there is a research centre in Hyderabad too, standing next to a centre on Ayurveda research.

We peeped in and saw some lovely old classroom furniture - beautifully designed benches and tables that make you want to join college again. Then we headed east and walked along a beautiful cobble stoned (something like it) street which is part of the pedestrianisation project of Charminar. The entire street is lined with old buildings and some dental hospitals - there are so many of them there. We stopped at a beautiful old gate which was also the Rath khana - where chariots were kept.
Then came the Sardar Mahal to the right, which was a palace, built for the wife of the sixth Nizam Mahboob Pasha, Sardar Begum. For some reason it was never occupied and used as a palace and has been converted into various government offices (currently GHMC offices). It is a beautiful old structure, spacious and warm. Lots of monkeys too.


Then we turned into narrow streets - which was the most exciting part of the walk. And old mosque from the Qutb Shahi's time. Then we visited the Bargah Panj-e Sher-e-Vilayat named after the palm impression of Nafs-e-Rasool. Then the Khadm-e-Raul-Alava which houses the sacred footprints of Prophet Mohammed brought in 1575. It has been a couple of days since Moharrum and the streets were littered with blades and bloodstained bandages. 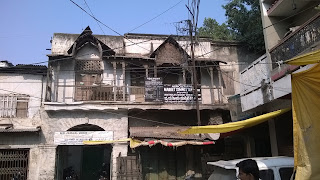 Some more narrow gallies and we were in the lovely Mir Alam Mandi with its huge kaman dominating the market place. Another Qutb Shahi period mosque can be see at the Mir Alam mandi. Fresh vegetables were being sold. Anjali looked for lemons for a lemonade stand which is being proposed today. What next?


We joined the main road and passed the Devdi Inayat Jung Bahadur. Inayat Jung was a scholar who translated the  Persian map of Hyderabad Deccan. There is a platform in front of the Devdi where the owner of the Devdi stands and receives the procession of Bibi ka Alam. The Devdi is presently being used for Shia congregations.

A little further down the road we see the beautiful Nizamia Girls College. Further down on the right we see the Hathi darwaza or the Peeli (yellow) darwaza. It's big enough for an elephant to enter and hence the name perhaps. This was the original entrance to the Purani Haveli but now a road bisects the front part of the gate and the palace. Apparently, the Dabirpura gate which is as majestic as this one stands a little ahead but we did not go there. We retraced our steps and headed to the Purani Havel. 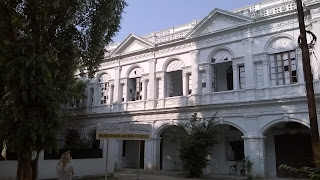 It's spacious and beautiful. Takes our breath away.

Purani Haveli was built during the Qutb Shahi period in the 16th century as a residence for the Pehwa of Mohammed Quli. Apparently it was used as a nodal office for trade even then. The palace was later acquired by the Nizams and renovated. Since this palace remained unoccupied for many years as the Nizams used the Chowmahalla palace instead, this became Purani or Old palace.
It saw some years of grandeur though because the fifth Nizam was born here and the sixth Nizam, Mahboob Ali, made it his permanent residence (before he moved to Falaknama palace). In 1971 Mir Barkat Ali Khan son of Nizam VII donated the palace to the Mukarram Jah Trust. There is a lovely garden, two rows of beautiful buildings on either side which house offices and a junior college, vast courtyards and the palace itself at the far end. There is a museum of HEH Nizam which includes a humongous wardrobe, but we did not get to see that because the museum opens only at 10. 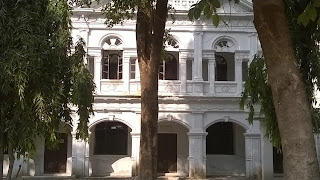 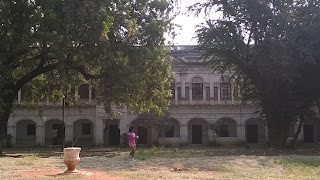 We ate the breakfast of idli and vada which is part of the event and took a rickshaw back to Charminar. Another day well spent. 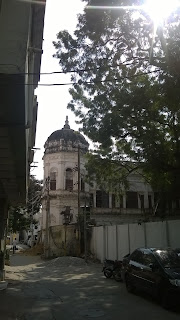 The huge arches, the old mosques, the ancient buildings, the plan of the old city, the history and the drama makes you want to come back again. Just as the decay and neglect worry you as it is a space that is slowly but surely being swallowed by the demands of a new city, a new world. These spaces and ideas have a quality that is missing in the new spaces - the soul is missing. A look around and you can see greed, poverty and survival.
Posted by Harimohan at 11:55 PM