Anjali - Lessons in Discipline and Punctuality

Anjali's school starts at 830 am. But it's not 'sharp'. At least not until last week until which time some leeway was given. A circular was issued that since children were not coming on time (mainly due to parents' slacking off), the school would take strict action and send latecomers back home. The day after her exams, (which Anjali handled despite a fever), she and I were late by five minutes. 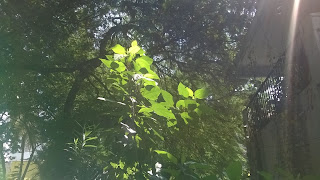 I could sense from the deserted road and the three people near the gate - the watchman, the administrative manager and the vice principal - that something was not right.

I stopped the car at the gate. Anjali must have been smiling at her R teacher who was at the gate - she really likes her teachers. Also it was a day before her 'school birthday' (since her birthday always comes on a holiday, she gets to celebrate it a day in advance) and she had many plans with her friends. I am sure she must have been readying herself to step out of the door and into her school's open and welcoming arms. But wait.

I lowered the window to enquire. R smiled and said 'It's past 830. We are sending everyone who is late today back.' I asked - 'So we go back?' She smiled and nodded. She did add a rider though (since we are rarely late that earned us that breather perhaps). 'I just sent some children back. It won't be fair if I allow her. Come back after sometime if you like.'

I nodded. Fair enough. Five minutes or one minute, we were late. Funnily the five minutes delay was entirely my fault - Anjali was ready well in time. For no fault of hers, for not foreseeing the severity of the discipline issue coming up, for wanting to go to school and nothing else on her first day of recovery from illness - she had to face this sending off. She is sensitive to what the teachers think - much more than I was - and I wondered how she's take it.

But her face had already crumpled. 'But how can they send me back when I went to school?' she asked, tears in her eyes.

Put that way, I did not have an answer. She was not at fault. She had gone to school. Then why were they sending her away? Turning her down despite her best intentions?

She had not seen such rejection before perhaps (other than from her parents who are constantly at it). The same teachers who welcomed her with smiles and greetings were now saying she could not come to school because she was late by a few minutes. I can only think I understand her confusion, her sense of rejection.

At the same time I can also understand the school's desire to discipline the students (and parents!). I only wondered if it could have been done any differently so the lesson is learned - I'd be glad to learn it since I was the culprit - but without breaking that deep faith and trust between the child and the teacher. How will a child understand that the issue is between the school and the parent? All she cares for is that she wants to go to school and she was, after five years of exuberant welcome, rejected one day from entering the school.

On our slow, painful ride back I told her about rules and discipline. About how we would wait outside our gate at school, get caned for late coming. But the difference was that we had no smiling angels taking care of us as she had - the rules were clear, the canes were out there and used harshly in public view and so expectations were set. This was nothing like that. Something might have broken in that little heart. Something might have toughened. (And I am not sure I am entirely comfortable with this kind of toughening.) The stuff we call growing up. Discipline. I could only hope and pray that she did not lose her faith in her school and her teachers.

I told a friend about this. He owns a company and has problems of punctuality etc.
'That's the right thing to do. If they learn about discipline now, they will never go late. This is what is missing in today's kids,' he said. Funnily he never enforces discipline on his employees. He hopes that the school will teach discipline and his future employees will turn up in time.
'Maybe I should do the same thing too,' he pondered. 'They will learn.'

I told him that when rules are enforced, the 'soul' normally goes out. Great work only happens in a space of trust. With rules, people come as 9 to 5 people, do what they 'have to' and leave right on dot. Great work can never be measured in numbers. I know because I was never great with rules. But when a challenge was presented to me where rules did not apply, (normally where rules could not be applied). I loved it. My best work came there and it can never be explained logically - the effort, the hours, the quality of work and outcome, the vision - it all fell in place. The key is the challenge - and you need to understand what challenge really means to do that. You need to be creative enough to do that. Mostly you must understand that people must want to come to work - must love to come to work because they are learning something and not because they are being treated like school children. In a world where we must increasingly treat children like adults (in terms of responsibility, not punishment), we have adults being treated like children (freedom with no accountability). Give them responsibility, let them handle it their way. Support them when they fail. Let them not be afraid to fail. Provoke thought, push work ethic, set high standards. End words - make them come to you because the work is good. Make them find it difficult to leave because they are learning all the time.
My friend nodded - but I don't think it made an impact.

Another friend who lives in the US was around. He told me of his experience. He'd drop his son and son's friend at school everyday. The kids would sprint from the car to their classroom. The management sent a letter - kids must be under adult control all the time. Next day, the principal and staff looked on as the car drew up. The kids started running as usual. This time even my friend started running with them to the class. The perplexed principal was told that he ran to keep the kids under control. It was a funny incident and quite like my friend to do stuff like this to get his point across. In a later meeting with the management he drove it home. My friend said 'Why do you want to stop them or slow them when they are running towards the school? I'd have a problem if they were running away from it?'

School, work, home - people should want to come towards it. People must be drawn to it. If they are not, it's time for introspection. If they are, please encourage that behavior. Don't ever confuse the issue for them by mixing up their behaviors with others and punishing them for it. Once they make the wrong connections, the soul goes out of the work. And then it's a hell of a job to repair that.

Posted by Harimohan at 6:02 PM