Watched the old classic at home and laughed at the many popular jokes once again. Another Mel Brooks classic, one that leaves many unforgettable funny scenes and lines with us for years. 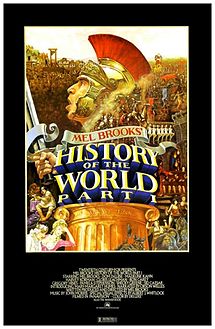 The movie starts where it has to - at the very beginning. The Forefathers, who were apes that learned to stand up, and then the Stone Age happenings. These include invention of fire (by heating a stone with a flame and then throwing both away), marriage (by hitting the unsuspecting woman or man on the head and dragging them away), music (throwing stones at one another's feet to cause an orchestrated set of screams), art, critics (who piss on the art instantly), comedy and so on. There is Moses and the ten commandments (he originally had fifteen but he drops one tablet with five), the story behind Last Supper (one can see the waiter  serving Jesus and the others). Then we move on to the Roman Empire where we meet Mel Brooks playing Comicus, a stand up philosopher, who gets an opening to perform before Emperor Nero. How he teams up with his agent Swiftus, the colored man Josephus and the vestal virgin Miriam to escape from the debauched world of Emperor Nero and his gang of men and women with the backdrop of the Roman Empire forms this part of history. The Spanish Inquisition is a song and dance item with Tomas Torquemada and the several punishments he metes out to Jews. Then comes the French Revolution and King Louis XVI, a Count called Count de Money, a garcon de pisse called Jacques who looks exactly like the King. How Count de Money replaces the King with the piss boy and saves him, and how the piss boy escapes thanks to his old friends from the Roman Empire days ends it. Almost. We have a trailer of the History of the World Part II before we end.

Nothing in a Mel Brooks movie is what it appears so you can take nothing of what is written above in that spirit. He pokes fun at everything and everyone and the movie is a laugh riot. Mel Brooks is one of a kind. One of the top 20 comedies of all time and certainly one of a kind. An all time classic and a good introduction to the history of the world for those who missed out.
Posted by Harimohan at 5:40 PM

It will remain etched in my memory, as long as the RAM is around.