Carry On Up The Jungle - Movie Review

Watched an old favorite - the Carry On series. Absolutely mindless fun and so perfect. Who wants to exercise the brain? 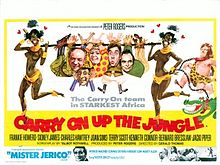 So here's this bunch that goes to Africa, apparently on a mission to find the rare oozlum bird (which apparently goes around in decreasing concentric circles until it disappears). The mission is led by intrepid Boosely (Sid James), and his assistant Upsidaisy, and includes famous ornithologist Tinkle, his assistant, the lady who finances the expedition and her pretty maid servant. The lady who has financed the expedition is actually looking for her lost son - her husband has been eaten by a crocodile because his watch was found in the stomach of one. The expedition is instantly plunged into drama as a gorilla keeps lurking around it, passions are set afire in the middle of the jungle, and a wild middle aged 'Tarzan' falls in love with the maid. Not to mention a native tribe that attacks the team, a herd of elephants, and finally a bunch of amazons from Aphrodisia who rescue the men for their mating purposes. The lady finds her husband alive and kicking and mating, he is the only man in Aphrodisia, and her son, who is Tarzan. All's well and that ends well.

Watching the many Carry On series was great fun. Saucy, sexy and mischievous, they demanded little from you, save a laugh. Good old chaps.
Posted by Harimohan at 4:45 PM