Watched the dilemma of Haider at Sensation theatre last night. Its pretty long at 2 hours 40 minutes or so. Visually very appealing, a mite dark and cold, the movie somehow carries off the mood of loneliness, of a dilemma unanswered, all through, in its locales, songs, characters. Based on Shakespeare's 'Hamlet' this is Vishal Bharadwaj's attempt at retelling  a classic story on one of the world's most difficult conflicts - Kashmir. 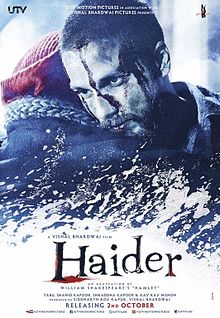 Haider's father, a doctor who is secretly helping separatist militants, is betrayed by a masked informer and is caught. His house is bombed and wife Tabu is forced to seek refuge at his brother's house. Their son Haider who was sent away from Kashmir is studying for his doctorate, away from the the influence of separatists, returns to find his mother and uncle sharing an intimacy which shatters him. Haider is vulnerable as he has lost his hero, his father, his support, his mother and has only his girl friend to turn to. She helps him all she can, including giving him a message she receives from a militant group with information about his father. The group tells him to kill his uncle, now a political leader, who has betrayed his father. His father is dead and his message to his son is revenge. As Haider contemplates how to go about his difficult mission, he loses his last support, his girl friend who unwittingly gives information about him to her father. Haider is on the run soon and suddenly there are bodies, bullets, bombs, grenades until he has to make one final choice - to kill his uncle as his father had reportedly told him or to forgive him as his mother tells him.

It is a movie with grand scale and very ambitious. The story and the dilemma are well brought out. Few things were jerky and could have been smoothened out I felt. His mental state is never very clear (which is perhaps intentional), his relationship with his girl friend is not clear either, his mother's intent and purpose at the end is again rather ambiguous. But overall its a fine effort considering the subject and the location he chose to set his story. Entertaining? Somewhere there but not quite for me. But it would still get a 7 on 10 for the effort, the melancholic loneliness, the difficult subject and technical finesse. Shahid Kapoor performs out of his skin, Tabu is melancholic, manipulative and brilliant (though I found no chemistry between her and Kay Kay Menon). Irrfan Khan steals the show in his cameo as Roohdar. Not to forget the Salman and Salman duo who are entertaining and probably the only comic relief in this dark movie, but what was that Salman thing about?
Posted by Harimohan at 9:37 AM