This was a taut thriller. Hedge fund owner trying to sell his company is being thwarted by the buyer who is being elusive. He returns to his family on his birthday and then slinks off to meet his rather demanding mistress. Out on a late night spin he falls asleep at the wheel and crashes the car. Girlfriend is dead which is what he does not want because it will bring his whole life apart - it will crash his family, his business and his deal. As he walks into the woods in a daze the car goes up in flames. He hitches a ride from a known source, untraceable and tries to act normal. He has however suffered bruises and some internal bruising. 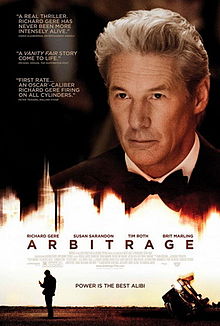 How Miller handles the extreme pressure of trying to save his company and sell it off to repay the loans made to cover a stupid investment (of 412 million without authorization? Come on!) is the rest of the story. As he tries to cover and and does it well using all his experience, he somehow finds out that it is not always about winning. There is much he loses though it appears that he has won - the respect of his family, his friends.

It is an interesting movie and one that opens up much perspective thanks to its many layers. Richard Gere is brilliant and the hardnosed tycoon who will do anything to win. He is fantastic in some scenes, the one where he negotiates the deal with the buyer for instance. Tim Roth as the cop cannot be ignored. Watch it if you have not. You won't get bored for a minute.
Posted by Harimohan at 5:41 PM