This time Daksha (Anjali's school) invited fathers to speak of what they do to the 1st and 2nd class children. I volunteered to do so on writing and sports. It was a learning experience for me.

The 1st class
The 1st class children, Anjali's class, were first and we decided to speak to them about cricket. After a brief introduction by Anita aunty, Kamakshi teacher and Chandana teacher the session took off. Do you want to ask Uncle anything? The children were vociferous in their response - with loud yells of Cricket, I like cricket, I am a batsman, Batter, Bowler, I have a bat, sixer, Dhoni, Sachin and some other words about skates and so on. They settled down a bit, having expressed themselves to their hearts' content and having informed me of their opinions. 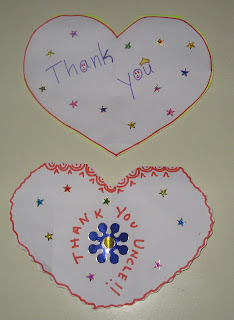 I told them that I'd tell them a story. They instantly calmed down and listened.

"Once upon a time, there was a boy. He loved playing cricket. He played with whatever he could get his hands on - broken bats, sticks, broken balls, even cloth balls and small stones. He would play in the sun, rain and cold, even at night sometimes. When he became older he went for school selections with his friends and guess what, he was selected.

Why was he selected? I asked.

The response was loud and clear from the children. Practice, practice, because practice brings success, hard work etc etc said the children. All the wisdom of the world was all there. Very good, I said. Now let us say Harsh (Anjali's friend) is the successful cricketer in the story. But now someone else also wants to be selected. What should he do? Cry? No, said the children. He must practice, he must work hard. Will he get anything by crying? No, they yelled very sure that he must not cry and must practice.

Maybe they could also practice doing whatever they loved, I suggested. But first, I asked them, what it was that they liked doing. Each one of them began their list - cricket, painting, flowers, skating, football, movies, television, reading and so on.

I asked them to write a small story on the one thing they liked. In five minutes they all came up with some small stories - some clearly written and well formed sentences with clear storylines, some stories with a beginning but no end, some only pictorials, some stuff inspired by certain gorilla stories. They all wrote enthusiastically and showed me their stories. I suggested some improvements and they came back with those. Anjali wrote a fine story about a tulip that wilted because the gardener poured too much water, but then when the sun came up, the tulip rose again. Fine happy ending, drama, conflict, characters, everything in three lines. Jaisimha write a dramatic story about a tiger, a rabbit and a hunter, Harsh about a cricket match, Saket drew a picture of a bat and ball, Manasi wrote about a little gorilla and so on.  I thanked them all for listening and left. They gave me a lovely, heart shaped card thanking me for coming. 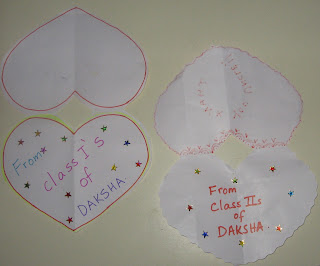 The 2nd class
Then the 2nd class children. Now these children were very organised and disciplined. Smita teacher was Anjali's teacher in a younger class and she was in charge along with another teacher. They started off well because a girl in the front row asked me - uncle how does one become famous? We went back on the same story again (this time without the story) but with the same responses from the children about practice and hard work. There were a lot of pointed questions about how to practice when parents do not allow etc. They also spoke about the things they loved doing - cycling, painting, stories, watching movies, drawing and so on. We discussed on how one must put effort, look for teachers who can guide them and teach them (what if my parents cannot find a good teacher?) and then learn and practice the right things. This class remembered that I had come to 'teach them cricket' last year - another small session we had done in the school thanks to Anita's initiative when all the younger children got an opportunity to bat and bowl a few balls. I thanked them all again and left but not before I got a lovely card from them too!

Good initiative Daksha. I realised that if I had prodded the children some more, I would have got more original information about how they viewed the world. The danger was that the topics may have got sidetracked in the limited time frame. Some other time perhaps. But still, there was much to learn, much to take away from for me and I hope it was so for the children too. It was a relief when Anjali came back from school and gave me the thumbs up - 'I liked your story,' she said. Ahhhh, worth it!
Posted by Harimohan at 10:49 AM