Or so I thought when I picked up this book (Quantum Physics Cannot Hurt You, Penguin Books, Marcus Chown, Rs. 450) to read. At 158 pages it did not look like it could harm me really so I plodded on hoping to be able to be better off on subjects such as the Theory of Relativity, Gravity, Quantum Theory, Atoms and so on. But sadly, despite the chatty language Marcus uses, the Quantum Theory whizzed past and I gave up. I do not think I can speak with any authority on it yet which has more to do with my capabilities than Marcus Chown's. Clearly I am not yet ready for Quantum Theory. 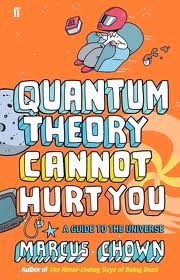 What got me to try this book was the cover which looked like a 'Quantum Theory for Dummies' one. But they really must have had some more evolved dummies in mind. The back cover is very interesting though and hooks you. Stuff like 'the entire human race would fit in the volume of a sugar cube' (that's how empty we are), 'we age faster at the top of the building than at the bottom' and 'every breath we take contains an atom breathed out by Marilyn Monroe', does make you want to figure out how and why but save the first, the other two are still gobbledegook for me. It is not very comforting to think that we are breathing in atoms breathed by dead people however attractive they may be.

But I am a better man still, for having read the book. I understand the small world or 'Small Things', a world that lives in these atoms that make up everything in the Universe a little better, the world of the 'Big Things' such as the planets the Universe and why they behave the way they do. Again, it reiterated to me that Einstein's genius, his creativity, has much to do with courage. He would apply the grandest of his thoughts to the Universe, beyond what one could conceive and that to me is interesting. It does show that to create something path shattering you need lots of courage, even to think. That's what creativity is about, it looks like.