This 2006 movie is based on the book by the same name, by Dan Millman, an athlete, gymnast, author and speaker based in the US, and is largely autobiographical. It is about the struggle of Dan Millman as a college student to make it higher in the world of gymnastics. He knows he is good but he is still trying to find that elusive something that makes him feel in control. In one such restless bout, he goes off for a jog early in the morning and bumps into an old man at a service station. The conversation with the old man who speaks with amazing clarity on issues that Dan is confused about, coupled with the speed, agility and gravity defying moves, make Dan want to meet him more and more. The old man, whom he fondly calls Socrates,  teaches Dan slowly the process of being the 'Peaceful Warrior' where one has to conquer the war on the inside. 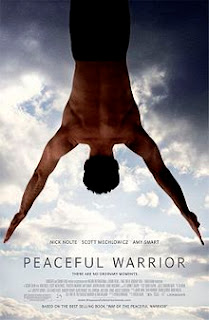 The young gymnast does not understand the old man's ways at all and gives up many times. Once he quits and goes back to his old ways of partying, philandering and it is then that he has an accident that shatters his leg and puts even his ability to walk, under a cloud. The old man comes to him and asks Dan to train for his gymnastic dreams, without any attachment. Dan slowly but surely understands the way of the 'Peaceful Warrior' and makes an unlikely comeback into the gymnastic team.

"Being in the present moment", "being the move", "knowing the three things in life - paradox, humour and change", "the journey being more important than the destination", "the pursuit of excellence without attachment to the reward", "that there are no ordinary moments", and many more such concepts and thoughts are discussed by the guru and his protege. Another protege is shown, a girl, with whom the young gymnast appears to fall in love but that thread is left unresolved.

'The Peaceful Warrior' is an interesting movie with several quotes that one can use in one's pursuit of excellence. Especially in hard demanding times, when there is doubt and fear, the movie's dialogues do breathe in much inspiration. Most of the stuff is what we have heard before but that does not make them any less impactful. Certainly worth a watch for anyone.

On the negative side, a rather irritating side at that, the movie tends to tell all and show nothing. Everything is said by the guru and his protege in conversations, nothing shown. The guru's amazing speed etc is not on evidence anywhere except in one scene, in the rest of the movie he is plodding around slowly. Almost every concept that Socrates tries to tell the young man is discussed and not shown through practice which makes it a rather lazy way of telling the story. It would have been far more interesting if they had found ways of showing how those concepts are realised through practice rather than simple showing the boy coming in through windows, doors, and adopting such needlessly cute tactics. But despite all that, worth a watch, because there is some stuff that makes you introspect and can help.
Posted by Harimohan at 2:19 PM