Here is a link to a really fine short film 'Two Sat Under The Cuckoo's Nest' made by aspiring young director Mallik Ram. It was screened last evening at La Makaan which lends its space to all things cultural in the city. This screening itself was part of five short films screened by Scene 4. The film got a rousing applause and won many accolades from a packed crowd that was bursting at the seams (I was there), for the innovative way it was made. Here is the link to the film on you tube. You can share your comments on the movie.

The film begins with an unhappy actor sitting on a bench in a park in Vizag. He is Pneumonia X2, a dying strain of disease who is depressed, unhappy, has no hope and has a world view that is totally lost. He would be - its his last day before he dies. After a while a happy-go-lucky, pleased-with-the-world person who is full of beans joins him - Diabetes 34MH24, who is full of hope and happiness. His happy entry makes the depressed one rather uncomfortable, he wants to wallow in his self-pity and not be affected by some upbeat person around. The two diseases talk of their contrasting views in life, their opinions, discussing movies, ideas (a short animation where they see person losing everything due to excessive greed), Fellini and finally land up discussing proverbs. They both laugh as they think of how contradicting proverbs can be and as they laugh while coming up with contradicting proverbs, their outlook to life changes into something upbeat. They end up feeling happy at being part of this beautiful life and feeling immense gratitude to life.

In Mallik's word the essence of the movie is 'to convey the thought that life is a paradox. One must take it the way it is and be grateful for what one has. When you love each moment of your life, it is beautiful.' Fine thought, well captured, 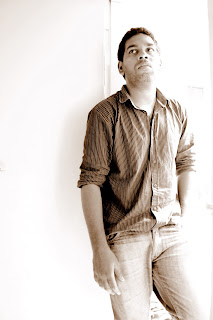 Mohana Krishna Indraganti on 'Golconda High School'. He always impressed me with his focus, commitment and willingness to learn. He would work late hours, never say no to work, always pushed the limit. He bought a great combination of being reliable and being creative, being passionate and being without ego - a rare attribute. One can also sense that there is much more substance beneath what he shows, some creative force he had bubbling inside. His choice of music, films and literature, in our fleeting conversations during shooting, also gave an insight to this young lost-in-thought lad.

Mallik is an architect from Andhra University, Vizag, a 28 year old who speaks a different language from the rest of the youngsters I have seen or met. After a short stint as an architect, working with various construction companies in Hyderabad where he moved for better job opportunities, he decided to back himself and his love for making films. He has made four short films so far apart from the latest one - 'Unsung', 'Bon Voyage', 'Luce', 'Between the Pain and the Plan'.

I asked Mallik what makes a young lad of 18 from Vizag, one with a normal family background, so intense and driven about movies. Mallik says he was the regular youngster who discussed movies, literature, music - listening to Pink Floyd and Led Zeppelin until something in his mind led him to want to express himself through making movies. Among the directors he has studied and watched are Fellini, Truffaut, Bergman, Woody Allen and Tarkowsky and he hopes to make movies like they do. More so, Woody Allen kind of movies with which he identifies a lot. Among Indian directors he likes Ray, Vishal Bharadwaj and Bapu. Among the writers of the world he finds Rohinton Mistry, Salman Rushdie and Arundhathi Roy deeply inspiring as he does Raja Rao, whose 'Great Indian Way' has greatly influenced him and taught him much about one of his great heroes, Mohandas Karamchand Gandhi.

Mallik says he would like to make Telugu movies of course. He plans on doing an adaptation of Mistry's 'A Fine Balance'. Great idea - I love the book! I ask him what kind of a movie he would like to make to start his career with. 'Romantic comedy,' he says. 'Something on the lines of Annie Hall, Before Sunrise, Before Sunset. But then I would make some of the movies I would like to, dark movies, apart from all other genres which i would like to explore.'. I ask him why he likes making movies and he says without any hesitation - 'I am happy making films. I think they are the best medium to express myself to the fullest, to the world. I think its pretty much the way its going to be - make movies for the rest of my life'.

What else, I prod. Mallik says he would like to write books as well. He backs himself on his writing skills. He is known for his dancing skills, his choreography and his sketching talent. One wall of his rented place is painted by him, a mural. And so, after a rambling discussion that lasted about an hour or more, the multi faceted, intense, creative, hardworking, focussed and intelligent young man moved on - caught up by another idea he was dying to put on paper.

Mallik, I do like your work and really enjoyed watching this short film TSUACN! I for one would certainly watch your movies. You do have the clarity to convey your thoughts, the intelligence to engage and the intensity to experiment. Here's wishing you luck for all that you wish to make and show, many successful and creatively fulfilling movies and a highly successful and accomplished career.

While with Mallik I was also fortunate enough to meet his friend and editor of TSUACN, Shashank. Now Shashank is a young software professional who also makes short films on the side and it was fascinating to see these youngsters discuss ideas and expressing themselves so well. 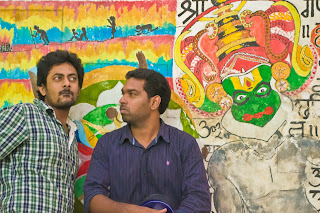 Shashank has made four short films so far - 'Verge' in 2009, 'What Kind are You?' and 'The Visit' earlier. All these films are on youtube. I have not seen them yet but I will soon enough. Here's a link to 'Verge'.

Shashank is from Kakinada and has studied engineering from Maharaja College, Vishakhapatnam. He also wants to direct movies and is deeply inspired by the Coen Brothers. The kind of movies he would like to make would be like 'Snatch', 'Memento', 'Lock, Stock and Barrel'. He says he would like to prepare himself to direct a movie in about two years time.

I found it interesting to see two small town boys talk of making movies, talk of learning from the Masters, have a creative zeal to not merely talk but make short films and stand up to be critiqued. But this is the age of small town boys as we have witnessed in cricket, and I am already impressed with what I saw. They have the desire, the passion and the skill. Here's wishing you Shashank, luck on your journey as well. I will try and get some links to his movies as well and put them up here.
Posted by Harimohan at 2:17 PM

Mallik reminds me- Golconda High School and Ashta Chamma both got good reviews from a friend, Kumar, whom I met today at IIMK. He was happy to know my insider connections too.