Johnny Got His Gun - Dalton Trumbo

Unbelievably intense anti-war story of a young 16-year-old who goes to war and loses all his limbs, the front of his face - ears, nose, eyes - and how he tries to cope with his life after that. Searing anti-war take apparently inspired by a news item that the novelist screenwriter Dalton Trumbo read about of Prince Charles visiting a soldier in the hospital who had lost all his limbs. 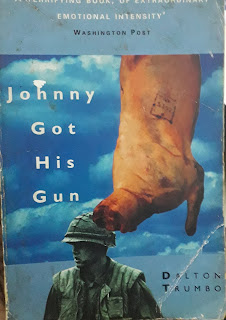 Trumbo keeps the intense story going till the end, with just the internal monologue of this life trapped in a body that cannot speak, taste, hear, smell or move. The realisation that he has lost all his body parts, the inability to do anything about it including scratching an itch makes him try to engage his mind in figuring things out. He senses the distance of the door from his bed with vibrations of footsteps, tries to keep track of time with an intense effort, realises he can try and communicate by using his neck to tap a code. A sympathetic nurse deciphers his attempts, brings in an authority whose first reply in code is 'What do you want?'. A dumber question could not be asked and the soldier seethes in anger - what can you give me he rages inside. But he does convey that if they allowed him some social interaction, even as a freak show, he could earn money and also support others. Schools, colleges, museums, circuses...anything he says. the man from the organisation says 'What you ask is against regulations...who are you'. That's when Joe Bonham realises that they do not want him alive as proof of how dirty war can get. He takes off on the system of war where some people sitting in corridors of power pit people who have no agenda and who only want to live, against one another to kill and maim someone they don't want to kill. As powerful an anti-war story as one can read. Thanks, Vinod bhai.

That said, I must also thank Sagar for giving me the movie 'Trumbo' to watch a few years ago. Trumbo was one of the Hollywood Ten who were called up to explain themselves to the Committee investigating anti-American activities in 1947 (being part of the Communist party was construed as being anti-American much like what is happened now in India). Trumbo and the Ten get blacklisted and are given no work by Hollywood. Yet Trumbo manages to write classics like 'Roman Holiday' and 'The Brave One' under a pseudonym or for another writer, both of which won Academy Awards. Trumbo wrote 40 screenplays (Spartacus, Papillon, Johnny got his gun, Exodus, Thirty Seconds over Tokyo), 7 books and some plays. Interestingly his bio says he wrote 88 short stories and six novels in the nine years when he was studying and working at the University of California, all of which were rejected. But what a volume of work to write under so much rejection. No wonder he became the highest-paid screenwriter of his time. Another interesting fact - as opposed to the Hollywood Ten who never got a chance to explain themselves by the biased committee, the one anti-communist writer who cosies up to the system is the one and only Ayn Rand!

'Johnny Got his Gun' is a must-read like Vinod told me while giving me the book. But you need to be able to stomach it. Glad I read it.

Posted by Harimohan at 7:08 AM