My second Vikram Seth after 'The Golden Gate'. Thanks Vanathi for giving it to me. It's the story of Michael Holmes a violin player and his love for Julia whom he'd met in Vienna when they were in college studying music. And his love for music of course. 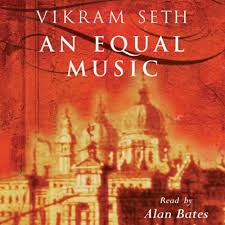 It is a highly acclaimed book with a lot of technicalities on music - quartet, quintet, this and that. Michael plays in a quartet in London - the others being Piers, Helen and Billy. One day he sees his old love Julia on a bus. He appears to have left Julia rather suddenly in Vienna and caused her severe hurt. But he tries to track her down in London and fails - only to have her show up at one of his shows. Julia and Michael resume their love affair though she is married and has a child. The information that she is slowly going deaf does not deter her from playing with the quartet on a tour to Paris. Anyway they realise that the affair cannot continue and it affects both their lives and careers.

Nothing about Michael or Julia was interesting to me. Maybe there was a layer that connected them through their music but I didn't get that. To me it looked like Michael just wanted her, without making any commitment, not really caring whether it hurt her or not. Julia seems drawn to him for no reason, except that she wants to get hurt again and she does.

The music bits are supposedly written very well but I didn't understand them much. The human story was boring. i found the characters rather one dimensional, even immature.
Posted by Harimohan at 9:55 PM