The book is a tribute to Brian Johnston, or Johnners, who was a cricket commentator, author and TV presenter. Brian was known for his humorous take on anything, making things simpler for viewers and making a complicated world appear easy. 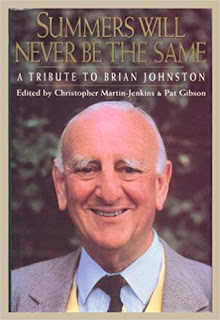 I bought this book in the 'Box' thing - where we fill up our box with as many books as we can. Brian is not someone I knew of at first glance - Henry Blofeld and co I had heard and Brian I might have heard too. I should check those references out and listen to his commentary if it's available somewhere. The book is a bunch of tributes written by family, friends, colleagues and even Prime Minister John Major in whose words the title of the book appears.

Johnners was a wicketkeeper and loved his cricket. He played for his school and for many other clubs. He loved a joke and was known for his many pranks as a practical joker. They say he never grew out of school - his humour and take on life was unpolluted by anything adult (he did love his seaside jokes though). He lived like a Wodehousian character they say, enjoying one moment after another. He had this habit of calling everyone with a Godders, Johnners, Aggers, and had nicknames for everyone and everything. He loved chocolate cake, loved making commentary fun by talking about anything but he prepared hard and never missed a ball. Johnners worked with a full calendar until his last day. He was 82 when he passed away and had many speaking engagements left.

I loved everything about Johnners and I am glad I picked this book. Apart from spreading sunshine and not taking life too seriously, he never grew up, which is a great trait to build in I feel. Another thing I liked was how he would call his friends who were not well, every day, or call his friends widows to check on them, or even old friends who were out of touch. He replied to almost all his fan mail in his own pen, and there was tons of it. I am going to pick up a thing or two and practice them.

I found the way the authors structured the book very interesting. They got everyone who knew him to write about him - from a para to a few pages and put them together. Wow! That's simple. The idea being that it's a tribute, but it does get the whole life story across very well indeed.
Posted by Harimohan at 3:33 PM