These are fantastic tales! Sindbad the beggar meets Sindbad the sailor by chance as he sings a lovely song about poverty and fate. Sindbad the sailor, a wealthy man who hears the song, invites the beggar inside and tells him some amazing stories of how he courted danger in search of fortune and how  he managed to come home richer from the experience. But the experiences are so scary that one wonders why he went back again. Surely Sindbad the beggar would have understood that riches do not court the weak and fearful. They court those who are enterprising. 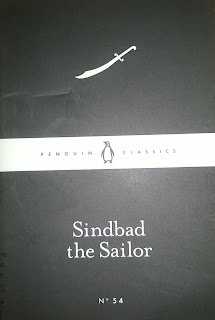 In the first adventure called the 'Valley of Diamonds' Sindbad the sailor sets off to do trade in a ship. Somewhere along the route he gets off at an island where the ship has stopped and gets left behind. It's a lush island with fruits and fresh water. There is a huge dome of white that puzzles him. Sindbad realises that its the egg of a rukh bird, a bird so huge that it can cover the sun. He ties himself to the leg of the rukh, which flies off to an island, full of huge snakes. This is the valley of diamonds from which no man has ever come out alive. Those in search of diamonds throw carcasses into the valley and when birds of prey pick up that flesh, they hope to get some diamonds that get stuck on the flesh. Sindbad ties himself to the carcass but not before he gets a huge haul of diamonds for himself and then returns home a rich man.

In the second adventure titled 'The Black Giant' Sindbad sets off again and his ship is caught in a storm. They land on an island full of ape men who make off with the ship. From the ape men some of them escape and land in a place full of bones and a huge pot which belongs to the black giant. So huge is he that the earth shook when he walked. The black giant is a cannibal and he eats one of them - roasting them over a spit - right in front of the others. After three of the juiciest men are eaten, the others decide that they must make a break for it and they pierce the sleeping giants eyes and make off in a makeshift boat. On the next island the other two men with Sindbad are eaten by huge snakes. Sindbad makes himself a box of wood and survives the snakes. He somehow  makes his way to a ship. It's the same ship that the ape men had taken away and the captain is alive. Sindbad recovers his material and then uses his tradesmanship to make money before he returns home.

In the last adventure called 'The Cannibal King' Sindbad sets off to trade and his ship is wrecked. He lands in a dangerous tribe of Magians that feed people with food and oil that makes their bellies swell so the Magians can eat them. However Sindbad does not eat their food and stays away. He remains emaciated but sane while the other lose their senses. The Magians lose interest in him. Sindbad escapes and reaches a new land where he wins the favor of the king by making him saddles for his horses. The grateful king makes Sindbad marry a local girl and asks him to settle down. However the wife dies and the local custom is to bury the spouse with the dead spouse. Sindbad is buried in a cave full of corpses and he survives by killing all the live spouses who come down the cave with their dead ones and eating their food. In time he discovers an animal route to get out, takes all the belongings of the dead and escapes on a passing ship.

In all stories Sindbad survives by the skin of his teeth and by keeping his wits about him, He not only survives but makes a fortune as well because he takes brave initiatives when his existence is threatened, Sindbad is from Baghdad and his travels normally are form Baghdad to Basra. The story comes from the Arabian Tales. Fantastic stuff and full of gore and wonder.
Posted by Harimohan at 10:01 AM