Selma is a town in Alabama. The story is set in 1964 when African Americans were legally allowed to vote but were, in many devious ways, kept from voting. For example they constituted 50% of the population but less than 2% of them were registered to vote. Reasons for non-registry as voters include stuff like them having to provide all kinds of documentary evidence followed by an interview with questions like - what's the preamble of our constitution, how many justices are there in Alabama and then the killer, name them all. Oprah Winfrey who plays the role of Cooper gets a chance to get her registration denied. Or a voter has to be introduced by another voter but then no one really is a registered voter so they cannot get registered. Many such Catch 22 situations were created to keep them away from voting and thereby being subject to white rule which was cruel and discriminatory. Martin Luther King who has just won a Nobel Peace Prize tells president Lyndon Johnson that he must allow the African Americans to vote. The President however wants time. 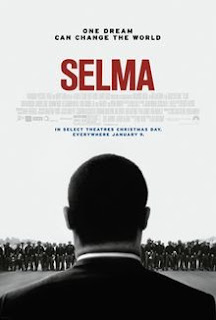 The peaceful protests, demonstration and requests are part of the strategy by Dr. King and his Southern Christian Leadership Conference (SCLC) and they plan a peaceful protest walk from Selma to Montgomery. However the governor does not give permission and the courts seek to hear the case on a date beyond what is set - but the walk takes place. Police use excessive force on unarmed protesters which is watched by the entire nation. On the next march many white Americans join the march. The police allow them to walk but for some reason King does not continue the walk. After a couple more deaths, the judge allows them their walk. Recognising the gravity of the situation President Johnson pushes through a bill to eliminate restrictions on voting. The walk continues and ends in Montgomery. Finally they get to vote. Through their vote they get to elect people who represent them and their aspirations socially, politically and economically none of which are possible otherwise.

The troubles the African Americans face to get their due is shown clearly. The white population does not want them on equal footing and as governor Wallace says - next they will want to occupy the parks, then they will want to vote, then they will want stuff free without working. His main grouse is that they are never happy so we should keep them at a distance by hook or by crook. Johnson does not share his view but one can see the deep biases that run through. Similar biases run here in India too and all one has to do is run through a few fb pages to know the extent of bias we carry. The law provides them a vote but the administration retains a set of rules that makes it next to impossible for anyone to register as a voter. The idea is to keep all the power concentrated in the whites so they can keep the African Americans away. David Oyelowo as Martin Luther King is powerful, Wilkinson as Johnson is perfect, Tim Roth does a great job as always. Small roles by Cuba Gooding Jr, Oprah Winfrey

Some lines are very poignant. King's wife Coretta meets Malcolm X when King is in jail and is not sure if she is prepared to handle him. Her friend tells her - that the blood of her ancestors who have sailed the seas, who have borne the atrocities of all these years, flows through her and that she needs no more preparation than that. I also believe that to be true - at the point of action we must back ourselves to be fully prepared. If we were not, we would not be there.

Another line is said by King's friend who tells a depressed King who is worried that they will finish this fight, this people - that birds fly free in the skies and they do so because they have god's grace on them. So too will we find that justice, that right. He says it so well and comforts a defeated King. The same hope must also hopefully echo in those who feel let down - tomorrow is another day. In the end, justice will prevail.

One thing comes through. Power makes monsters of people. I am sure of all people, almost. Those who do not have or crave power will always find themselves seeking justice at the hands of those who do not want to give any justice. Now they do not want to give justice because they feel superior and also feel insecure. This leads to extraordinary situations. The restraint King urges and shows is what takes their movement through. Just sheer perseverance, resilience and grit against all odds. These are the movies that need to be made so the stories are not forgotten. They may not be fashionable, but they are the truth. If we wish to retain our glorious stories, we must also retain these stories.
Posted by Harimohan at 1:37 AM